If you want to hunt moose in Oct. sign up for lottery now 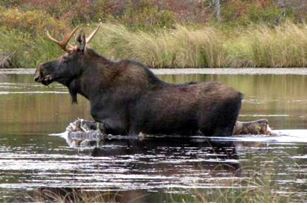 The number of moose hunt permits that will be offered for this fall's hunt has not yet been determined as harvest and survey data are currently under review. (Courtesy photo)

To enter the New Hampshire moose hunt lottery, visit www.huntnh.com/hunting/moose.html, where you can enter online or print out a mail-in application. Hunters can also pick up an application at any Fish and Game license agent, Fish and Game Headquarters, or Fish and Game Regional office.

Moose hunt lottery applications for 2018 must be postmarked or submitted online by midnight Eastern Time on May 25 or delivered to the Licensing Office at Fish and Game headquarters in Concord before 4 p.m. that day. Winners will be selected through a computerized random drawing on June 15 at the NH Fish and Game Department in Concord.

Each applicant can enter the moose hunt lottery once per year. A bonus point system improves the chances for unsuccessful applicants who apply each consecutive year. Each point translates to a chance in the drawing. For example, last year the overall odds of a resident applicant being drawn were 1 in 87, while resident applicants with a total of 14 points had a 1 in 39 chance of being drawn. For nonresidents, the odds increased from 1 in 391 overall to 1 in 184 for applicants with 14 points.

Last year 6,850 people entered the lottery for the chance to win one of 51 permits. More than 1,300 people continued to accrue bonus points because they submitted an application for a point only. Hunters from five different states won permits in the lottery.

While people travel from all over the country to take part in the New Hampshire moose hunt, the majority of permits (about 85%) go to New Hampshire residents. The number of permits available to nonresidents is capped, based on the prior year's sales of nonresident hunting licenses.

The number of moose hunt permits that will be offered for this fall's hunt has not yet been determined as harvest and survey data are currently under review according to Wildlife Programs Supervisor Kent Gustafson. Final numbers will be determined later this spring.

While permit numbers may or may not change in 2018, a hunter's chance of being drawn and offered a permit in the lottery will be improved if you rank all wildlife management units on your application, Gustafson noted. You will have the option to decline a permit if drawn for a unit you prefer not to hunt.

New Hampshire has had an annual moose hunt since 1988, when 75 permits were issued for a three-day hunt in the North Country. The state's current moose population is estimated at about 3,300 animals. The availability of moose hunting permits is made possible by careful monitoring of moose populations. The resulting annual harvest of moose provides valuable information on the physical condition and productivity of moose and provides a unique recreational opportunity.