In our nation's capital, it's just natural to lose direction 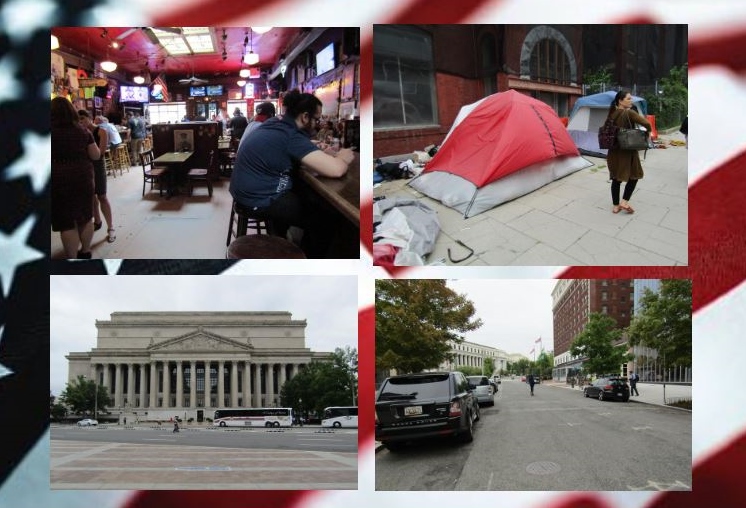 Clockwise from top left, The Irish Times, where at happy hour you get a well drink for $5, homeless folk pitch tents beside wide majestic avenues, a scooter speeds down a district street and the repository of U.S. archives. (Rochester Voice photos)

I went down to our nation's capital this week to cover the resentencing of Evan Liberty of Rochester, a former Blackwater guard who was sentenced in 2015 in the so-called Nisour Square massacre of Iraq civilians in 2007.

His 30-year sentence was cut in half at the resentencing held at the U.S. District Court of the District of Columbia as we reported on Friday.

I am by no means a stranger to Washington, having worked for Amtrak in the 1980s as an onboard café attendant on the Boston-Washington corridor.

I made the trip two or three times a week, working two days then having three off for almost two years.

I normally had a 12-14 hour layover, spending a night at the Commodore Hotel, which was located near Union Station and Capitol Hill. With the long layover, I had plenty of time to explore Capitol Hill, Dupont Circle, the downtown and more.

What I was struck with then, which was reconfirmed on this short trip are several things.

One, Washington was designed by a French architect Pierre Charles L'Enfant, designed, I believe, to make you get lost at every street corner.

Because while one line of streets is numbered and a perpendicular set is lettered, there are so many humongous squares, monuments, mammoth block-large buildings and directional one-offs, one not familiar should just grab a cab and pay the piper.

Now, I having been down there hundreds of times, eschewed such mundane conveyance, and promptly walked about five miles to get to and from the U.S. District Court of DC, which was about a half mile from my hotel.

Now you would think that with all these perfectly laid out streets you couldn't walk 40 minutes only to see the same court building you had left from, but it happened.

So, in that my phone was dead, I did the next best thing: asked a security guard, or any other uniformed individual how to get back to Union Station which was a stone's throw from my hotel.

More than once, I followed their directions only to become suspect as to their accuracy, ask another security guard or otherwise uniformed individual, who would directly contradict the previous directions given me.

At the end of the conversation I would ask, "Oh by the way, how far would you guess it is to Union Station."

Each time the distance grew larger and larger till one young man frowned, "Wow, it's like 35 minutes, you gonna walk that?"

"You damn right I am," I grimaced.

Finally I asked a young couple (ununiformed) directions to Union Station and they said they were headed that way, so I dutifully followed them and about 15 minutes later, home sweet home.

So the moral is it's easy to get directions in DC, but don't count on them being correct.

Remember, this is not your typical city, certainly not like Boston or New York. This is a city where one out of three workers is employed by the government.

That's according to a 2012 study by The Business Journals, which used data from the U.S. Bureau of Labor Statistics to determine that district's workforce included 247,000 government positions, accounting for 33.4 percent of its total complement of 738,600 jobs.

And if you compare the pace of pedestrians moving about through the work day in Boston, New York and Washington, you'll see the ones in Washington are far more relaxed, bless their hearts.

That singular fact is something I first noticed when I started going down their regularly as an Amtrak employee. It has been reaffirmed on several visits since then

It's no secret that job security at the federal level is like being a tenured professor at a state university.

I mean you've read the stories about misbehaving TSA employees who are taken off the job for serious infractions, but continue to get a paycheck for months and years because it's too expensive for the government of fire them out of their union position.

To think any of this folderol could actually go unpunished in the private sector is, well, total folderol.

However, in deference to our federal government, I will say one thing. I mean look at the size of the Government Accountability Office. I mean it's huge. They work so hard to make government accountable. Good for them! Bless their hearts!