Inside sources say Rice will get slap on the wrist; question is what will that look like? 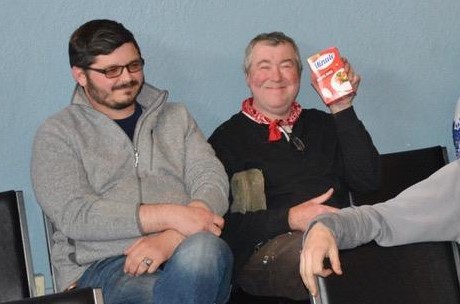 Will Rice be bagged? Old friends Chris Rice, left, and Doug Lachance were in a good mood on May 2 as charges were preferred on Rice. Lachance was on Rice's campaign in his failed 2020 bid to oust State Sen. Jim Gray? (Cliff Newton photo)

ROCHESTER - Rochester insiders who closely follow city government including a city official agree that City Councilor Chris Rice will likely get a slap on the wrist for his alleged misconduct over charges of harassment, retaliation and making fraudulent statements to city staff.
The question is, "What will that slap on the wrist look like."
That's anybody's guess as the city's mayor, the city manager and the city's attorney have stonewalled The Rochester Voice over possible alternative sanctions the City Council could impose on Rice.
The official city press release announcing details of tonight's trial says, "Sanctions can include removing Rice from the City Council. Removal requires nine votes in the affirmative."
New Hampshire RSA 49-C.13, the statute that governs removal of City Councilors, states, "The elected body may, on specific charges and after due notice and hearing, at any time remove the mayor or one of its own members for cause, including but not limited to prolonged absence from or other inattention to duties, crime or misconduct in office, or as specified in the charter."
A city official who didn't want to be identified said that Rice shouldn't be removed from office.
"What he said was out of line, it was repugnant, but he shouldn't be removed," they said referring to alleged comments made to fellow Councilor Ashley Desrochers including a "dumb blonde" comment.
The Voice's request for info on a possible list of sanctions may have gone unanswered because there are no documents that spell out lesser punitive measures such as censure or official reprimand. Right to Know requests only apply to the release of documents. If there are no documents there's nothing to release.
The city official we spoke with said they were looking forward to tonight's meeting to find out how the mayor would be parsing through any parliamentary activity that would enable a sanction short of removal, which the council may have no stomach for.
Beyond that it should be noted that a guilty verdict does not require belief beyond a reasonable doubt for conviction, only a greater than 50 percent chance that misconduct occurred, a much lower bar, which means it's very possible some of the charges like retaliation and making fraudulent statements to city staff will stand up.
The trial gets under way at City Hall chambers tonight at 6.