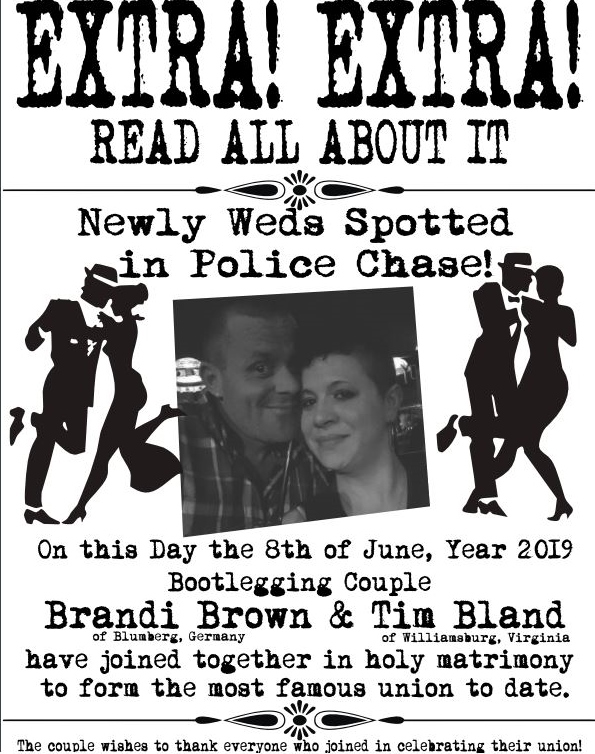 FRONT PAGE NEWS: The poster announcing tomorrow's wedding cleverly retrofitted with an acknowledgment of a police presence in the vicinity of the nuptials. (Courtesy image/Dawn Durocher)

SOMERSWORTH - The road closures scheduled for tomorrow's Food Truck and Craft Beer festival could have proved wedding day drama for a Rochester couple being married at a High Street function hall, but quick thinking by Somersworth Police helped to avoid any nuptial nightmares.

What could have been a wedding day disaster has been averted, agreed Somersworth Police Lt. Matthew Duval on Friday.

Tammy Harris, who manages the 1899 Ballroom and Function Hall above Somersworth's VFW, said when she learned on Monday that the Food Truck and Craft Beer festival was scheduled for Saturday she called the city's chamber of commerce, whom she said realized they had neglected to send her an email regarding the festival.

So Harris decided to call Somersworth Police and Duval, who arranged for the bride and groom to both get police escorts from a nearby parking lot at City Hall to the ballroom.

"We had a logistical issue with the road closures, but worked with the wedding party to make appropriate parking accommodations that were provided by the city," Duval said.

Dawn Durocher of Rochester, the chief wedding planner, said when she learned about the food truck and beer fest snafu she was petrified, but that Duvall's decisiveness in addressing the situation had been superb.

Plans now call for police to escort the bride, Brandi Brown of Rochester, and her daughter, who will be arriving at the ballroom in an antique Model A Ford.

Then, when the groom, Timothy Bland of Rochester, arrives he will be whisked to the ballroom in one of two ATVs police will be using to monitor festival crowds throughout the day.

Durocher, like any good wedding planner, incorporated the impromptu assist from police into her "Speakeasy-themed" wedding with a special thank-you card that will be handed out as favors to all wedding guests.

Meanwhile, outside the nuptials the Food Truck and Craft Beer festival will be going from 1-7 p.m., so maybe they'll also toast the newly wedded couple with a microbrew.

A phone message made this morning to The Falls Chamber of Commerce for comment was not returned.