Is shooting blindly into a treeline with no viable or visible threat still OK? 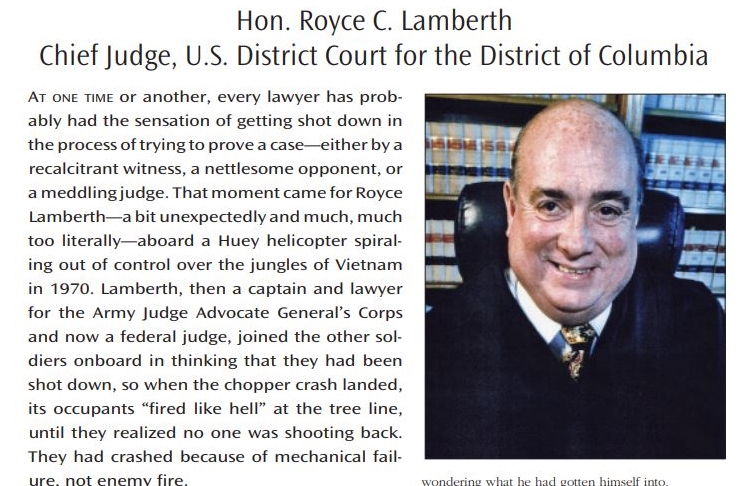 The opening of the Judicial Profile of the Hon. Royce C Lamberth (Courtesy/fedbar.org)

"At one time or another, every lawyer has probably had the sensation of getting shot down in the process of trying to prove a case--either by a recalcitrant witness, a nettlesome opponent, or a meddling judge. That moment came for Royce Lamberth--a bit unexpectedly and much, much too literally--aboard a Huey helicopter spiraling out of control over the jungles of Vietnam in 1970. Lamberth, then a captain and lawyer for the Army Judge Advocate General's Corps and now a federal judge, joined the other soldiers onboard in thinking that they had been shot down, so when the chopper crash landed, its occupants "fired like hell" at the tree line, until they realized no one was shooting back. They had crashed because of mechanical failure, not enemy fire."

Damned by wartime vagaries and detailed by his own law clerk, the right honorable Judge Royce C. Lamberth would likely have a hard time defending the actions of those U.S. soldiers aboard the Huey today given his comportment in the ongoing Raven 23 travesty of justice.

On Saturday the unjust, unfair resentencing of three Raven 23 security guards, including Evan Liberty of Rochester, was a month old, so it seemed like a good time to go back and try to deconstruct why a man of the law, a judge and former JAG officer, would think it was interesting or noteworthy to recollect to a biographer how those soldiers fired into those woods ... without identifying "a credible threat."

The fact is Lamberth was on the Huey in an attempt to defend soldiers accused of mutilating a group of North Vietnam soldiers they had ambushed and killed. But that's not the story today.

Nor is the story today that the three men had reason to fire their weapons because they had been fired at by Iraqi insurgents dressed as policemen.

The story today is what if those soldiers aboard the Huey had been Blackwater guards in Iraq in 2007?

And they fired indiscriminately into a woodline due to a "perceived" threat? And killed 17 innocent Vietnamese villagers, some children, who were out hunting wild pigs? Or foraging for fruit? Or having a picnic?

During the resentencing a month ago of Liberty, Dustin Heard of Tennessee, and Paul Slough of Texas, all accused of a killing spree in Nisour Square 12 years ago, Lamberth went out of his way to praise the young men for their comportment the past five years in federal prisons, but said he couldn't dismiss or condone the "carnage" that occurred at their hands during the shooting, in which 17 Iraqis were said to have been killed.

The judge chastised Liberty and his fellow Blackwater guards for panicking and shooting wildly into a square full of civilians without a credible threat.

During the sentencing, as the three stood before him just feet from the bench, he proclaimed with great gravitas and certitude: "We are a country that has a military and armed contractors who respect the rule of law."

The culpability lay with the accused Blackwater guards because they fired without a credible threat, prosecutors argued.

And what of those soldiers who fired into the woodline? I suppose if some peasants had met their maker in there, the soldiers would all have to be sentenced to 30 or 40 years in prison by Lamberth's thinking. Why? Because: "We are a country that has a military and armed contractors who respect the rule of law."

Even in a warzone.

And Judge Lamberth would likely say as he sentenced them something like this: "These seem like fine, young boys who just panicked, but the court can't dismiss or condone the carnage that occurred at their hands during the shooting."

Does that sound familiar? It should. That's what the judge said to the three men one month ago.

We'd like to talk to some of those Army soldiers aboard the Huey in Vietnam in 1970 and ask them what they think of that. Maybe you should too, Judge.