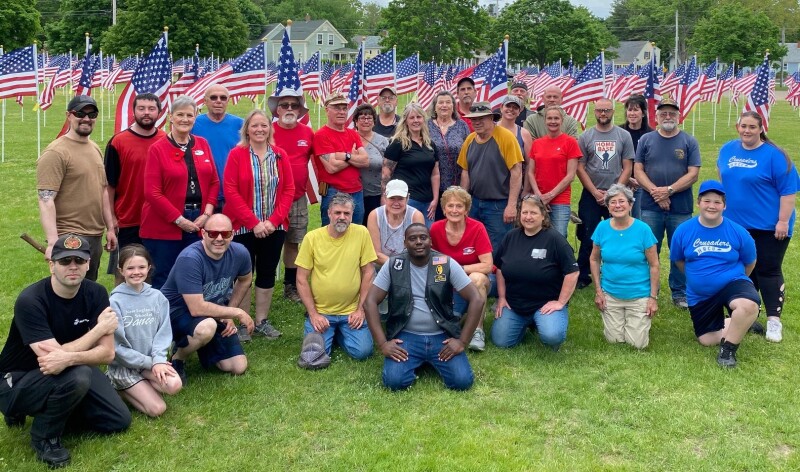 Some of the many volunteers who showed up to assist with setting up the Field of Honor on Friday. (Provided/City of Rochester)

ROCHESTER - Volunteers on Friday completed the Field of Honor display at the Rochester Common where the annual Memorial Day observance will be held on Monday beginning at 11 a.m.
Some 550 American flags were erected as part of the display honoring veterans, including 200 flags with a black cross on them that commemorate the sacrifice of members of the armed services who died fighting for our country.
Jeanne Grover, president of the nonprofit Voucher for Veterans and organizer of the Field of Honor weekend, said the display will remain up till Monday.
Scores of volunteers helped to put up the display, including a dozen from the Rochester Elks. Other volunteers included the American Legion Post 7 Color Guard, employees of Holy Rosary Credit Union, Rochester Rotary, Woodsmen RC and Rochester City Manager Blaine Cox.
As part of the Memorial Day Weekend observance, two buglers will play echo taps tonight, Sunday and Monday at 7 p.m. at the Common followed by Roy Greenleaf playing the bagpipes while walking among the flags.
Monday's observance begins at 11 a.m. with speeches from Brigadier Gen. John Bolduc and Rochester Veterans Council President Dennis Sellers.
There will also be a Post 7 Color Guard, a military salute, echo taps and the playing of armed services anthems by bagpiper Pat Boyle.