It was 'Zach Strong' day at the Legion, and it rode a red wave of love and support 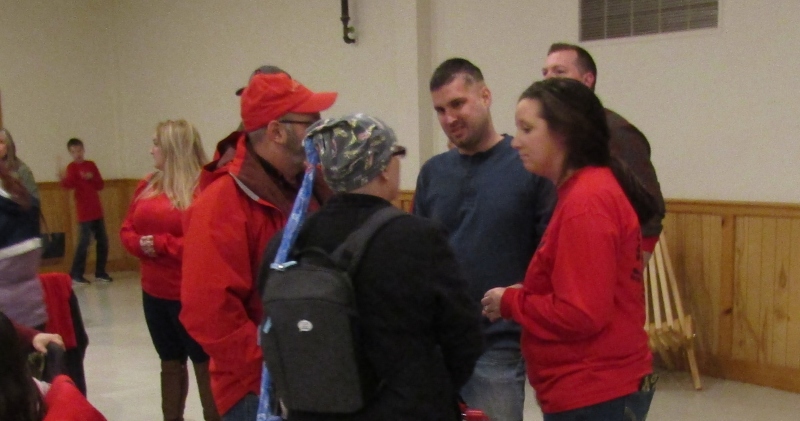 Zach Smith chats with a well-wisher as his wife, Candice, right, looks on during Sunday's fund-raiser for Zach at the Rochester American Legion. (Rochester Voice photos)

ROCHESTER - Heading into the Thanksgiving holiday there may be no one more thankful than a Lebanon, Maine, man battling Stage 4 brain cancer.

As he stood near his wife on Sunday afternoon, Zach Smith seemed almost perplexed as perfect strangers came up to express their support while attending a fund-raiser for him and his family inside a Rochester American Legion function hall.

Outside a biting chill and heavy rain ruled the day, but not the warm hearts inside. By 1 p.m. the parking lot was full; still they kept on coming.

"It's just overwhelming," said Smith, whose mantra since learning of his diagnosis of Glioblastoma has been "live strong every day."

His wife, Candice, said amid the radiation and the chemo, she, too, has managed to stay strong.

"I have to for the kids," she said. The Smiths have two young boys: Owen, seven; and Cooper, who is almost one.

Close to 300 folks attended the fund-raiser, with some 200 of them donning special, red benefit T-shirts at $15 a pop to show their support.

Much of the organizing for the benefit was done by Jane Weymouth of Lebanon, who is Zach's Godmother; and Julie Donlon, who is the assistant golf pro at the Golf Club of New England in Stratham.

"At first we were going to do a golf tourney, but it got too late in the year, so we decided to do this," said Donlon, a former Nute High star athlete.

Weymouth said Donlon, who had only met Zach a couple of time prior to his diagnosis, did the lion's share of the work, with the help of her and a fund-raising committee of about a dozen.

More than 85 raffle items were donated by area businesses large and small, as well as individuals, all of them worth in excess of $50, Donlon said. There was also a live auction for a generator and silent auction for several vintage Boston sports memorabilia items.

Glioblastoma is one of the most dangerous forms of brain cancers, doctors agree, but Zach is staying strong, he said, adding that between the radiation and the chemo, he's not backing down.

"These are remarkable times," he said, referring to the treatments he is benefiting from.

He added that even his doctors have financially supported him and his family, providing gas and food cards to help them out while he is out on leave from Albany Engineering.

He said chemo can be rough, but on Sunday he said he was feeling pretty comfortable.

"I feel pretty good, they keep me on steroids and fluids," he said.

He said he's due for his next MRI next week in Scarborough, Maine.

Zach is also thankful for his treatment schedule over the holiday, during which he only has to spend a couple of hours a week for treatments in Scarborough the next three weeks followed by a full week off.

"With Thanksgiving and Christmas, I'll get to spend more time with the family and that's important," he said.

A Go Fund Me Page has been set up in Zach's name. So far it has reached $7,000 with a single donation earlier today in the amount of $2305 by an anonymous donor.