It's all things dairy and herding dogs at Farm Museum event 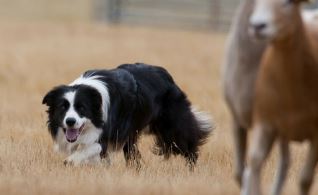 MILTON - Saturday will be a day of both "moo cows" and "move cows" at the New Hampshire Farm Museum on White Mountain Highway in Milton.

Titled officially as "Dairy Day & Sheepdog Trials", the event will comprise both officially judged highly trained herding dogs being put through their paces and all aspects of making homemade dairy products.

Eventgoers will learn about and get to try their hand at making ice cream, yogurt, cheese and butter.

Also part of the day will be set aside to watching highly entertaining and trained herding dogs show of their herding skills as practiced in both olden times and today.

According to museum director Mark Foynes, more than 25 dogs will be participating using sheep that are being supplied to the event with the help of Tim Molinero of Milton, co-owner of Heartstone Farm.

Next weekend on June 10 the museum will host a Civil War Encampment organized by members of the 5th Regiment, including some dozen re-enactors and a half dozen tents.

Their displays and informal talks will feature topics like artillery, firearms, Civil War era medicine and how troops coped with long periods of downtime between military engagements.

The encampment is being organized with the help of 5th Regiment member Randy Cook of Rochester, Foynes said.