'I've adjusted to life, but I still have nightmares; you never forget' 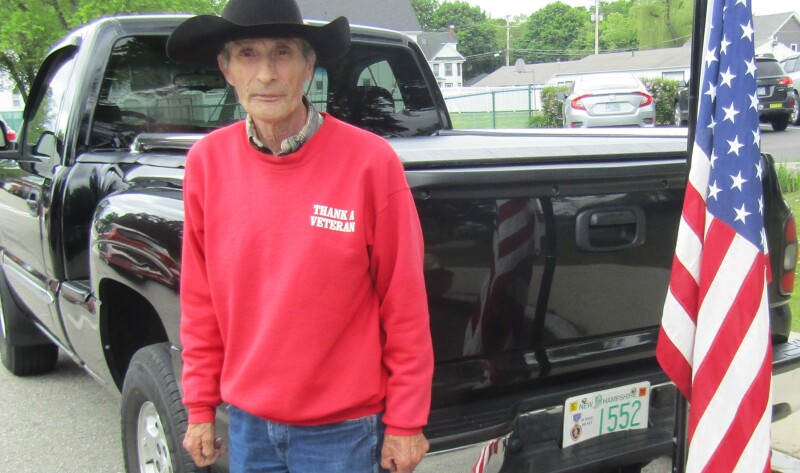 Robert Pelletier in front of his truck, which bears a veteran's license plate that includes recognition of the Purple Heart he received for being wounded in the line of duty in Vietnam in 1968. (Rochester Voice photo)

ROCHESTER - Robert Pelletier of New Durham will never forget his yearlong deployment in An Khe, a sprawling Army Airfield in the central highlands of Vietnam known as the "Golf Course."
Pelletier, part of a gun crew firing a 105 mm Howitzer, was often in the field of battle in support of special forces who would radio in to his team enemy coordinates.
On May 17, 1969, halfway through his deployment and three days after his birthday, he was doing just that when a Viet Cong mortar fired from a couple of miles away landed about four feet from him and his buddy.
"You hear a pop when it's fired," he recalled on Friday while looking for his flag at the Field of Honor at the Rochester Common, where Memorial Day observances will be held today. "The shrapnel went into my leg and hip. My buddy got it worse."
Pelletier, who was awarded a Purple Heart, said the Army wasn't done with him yet, though.
"They patched me up and put me back in the field," he said.
Returning to combat wasn't easy, he said, but nothing about war is.
"Vietnam was hell," he said. "All of it. To see people being killed ..."
Pelletier, 76, was drafted in 1966, took basic at Fort Dix, N.J., and was then transferred to Fort Sill, Okla., where he was trained in artillery.
"I wanted to be in communications, but at Fort Sill they said, "You raised your right hand, you're doing artillery."
Following artillery training he was transferred to Fort Richardson in Anchorage, Alaska.
In October 1968 he was deployed to An Khe, where he spent a full year.
Pelletier remembers the trauma, not only of the war, but of his return stateside.
"We were called baby killer when we first got back," he said shaking his head.
Looking around at the Field of Honor he added, "It's great we're being recognized like this," he added.
Upon returning from Vietnam Pelletier soon began working at the Portsmouth Naval Shipyard where he spent 37 years before his retirement in 2012.
"I've adjusted to life," he said, "but I still have nightmares; you never forget."