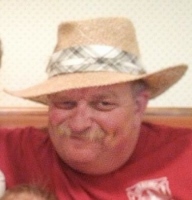 ROCHESTER - James "Jimbo" Erhard, 60, of Rochester, died unexpectedly Tuesday, January 16, 2018. Born in 1957 in Winchester, Mass., he was the son of the late John and Shirley (Sullivan) Erhard.
Jimmy was brought up on Plum Island, Mass., where he was a proud member of the Plum Island Fire Department. It was there that he met the love of his life Diane, whom he married in 1983. Jim and Diane began their family while living on Plum Island, having two daughters, Jessica and Michelle.
Jim began working at the Portsmouth Naval Shipyard in 1989, and he and Diane moved their family to Rochester in 1990. Shortly thereafter, he joined the Portsmouth Naval Shipyard Fire Department IAFF Local 123 where he proudly served until his retirement in 1996. For the last 19 years, he worked for the City of Rochester Department of Public Works.
Inspired by his early days working in kitchens at Ten Center Street in Newburyport and the Apple Orchard in Ipswich, Jim shared his love of cooking by hosting gatherings with beloved family and friends.
One of the most generous individuals you'd ever meet, Jim was a friend to all he encountered and shared with them his many interests including enjoying beer, surfcasting, writing, playing and listening to live music, and spending time at the beach. Jim loved to travel to Mexico with Diane making a yearly trip, often bringing some or all of their family members. When traveling near and far, he bonded with nearly everyone he met, particularly his fellow firefighters. Well known around the holidays, he would make an annual trip to the Shipyard Fire Department around Christmas with his illuminated Santa hat to spread holiday cheer. He was especially close to his "little sweetheart" Bella.

Jimmy was predeceased by both of his parents, and brothers Jackie and George.