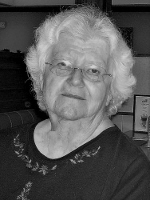 ROCHESTER - Jane Hawkes Gordon, 90, of Rochester, and formerly of Westbrook, Maine died Tuesday, Aug. 25, 2020 succumbing to pneumonia.
Born in Portland, Maine, to Percy and Ada (Strout) Hawkes, she grew up in South Portland, Maine, and graduated in 1947 from Windham (Maine) High School. She married David Whitcher Gordon in 1948, and raised her family in the Prides Corner area of Westbrook, moving in 2006 to live with her daughter and son-in-law in Rochester.
From 1963 to 1992, Jane worked for Porteous, Mitchell and Braun department store on Congress Street in Portland. She began her career there as a seasonal sales clerk, then moved up to the position of buyer's assistant. She worked for over a decade as the head of the sales audit division of the accounting department.
Jane was a 76-year member of the Grange, joining Pleasant River Grange in Windham, when she was 14. She belonged at various times to Highland Lake, Danville Junction, and Crown Point Granges. She participated in the Rose Ceremony, and held several offices including lecturer and chaplain.
She loved square dancing and camping, both encompassing her passion of travel. She and her husband traveled by train all around the United States and across Canada twice. She traveled with her daughter out West and north to Alaska. She was an accomplished seamstress, and enjoyed knitting and counted cross stitch. She read hundreds of books and used her knowledge to solve thousands of crossword puzzles.
She is predeceased by her husband David and her daughter Carol Ann Gordon.

She is survived by her daughter, Debora Gordon Longo, and her son-in-law, Richard; her niece Sarah (Gordon) Hewitt and her husband Michael; her granddaughter, Melanie (Longo) Schofield, and her husband Robert; her grandson, Benjamin Longo, and his wife Lori; her grandson Etan Nasreddin-Longo; her great-grandchildren Richard Tucker and Amanda McDonald; and grand and great-grand nieces and nephews. She also leaves her special friends Wesley and Glenys Ryder, Bill and Shirley Hatch, and Bethia Callahan who were so kind to her always and the Friday Breakfast Girls who welcomed her into the laughter.