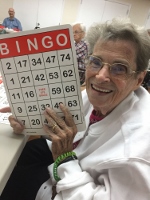 LEBANON, Maine - Jeanne F. Stuart, of Sebring, Fla., (formerly of Lebanon), died on Thursday, September 7, 2017, at Fairway Pines in Sebring. She was born July 21, 1934, in Sanford, daughter of Frank and Edna (Bourque) Morgan.
After graduating from Sanford High School, she began working at the Goodall Mills in Sanford, where she met her husband J. Brooks Stuart. They were married on November 14, 1953 and celebrated 59 years of marriage before he passed away on February 21, 2013.
Jeanne loved to sew and was known for making beautiful clothing and crafts for her children, grandchildren, and friends. She also enjoyed playing cards and Bingo, going shopping, and having a good dish of ice cream.
She and her husband both worked at General Electric in Somersworth, N.H., for many years. Upon retirement, they served with the Mobile Missionary Assistance Program (MMAP) for over 10 years where they traveled the U.S. helping organizations in need.
Jeanne is survived by her son John B. Stuart, Jr., Lebanon; daughter, Jill Guptill and her husband Mark, Milton, N.H.; son-in-law, Stephen Peasley, North Berwick; and three grandchildren, Jesse Peasley, Jordan Marie Guptill, and Tyler Guptill. She was preceded in death by her daughter, Janice Peasley.