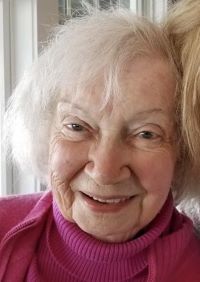 GATLINBURG, Tenn. - Jeannette F. Varney formerly of Dover, N.H., died on Tuesday, Sept. 22, 2020.
Jeannette was born on Aug. 22, 1923 in Farmington, N.H.. and graduated from Farmington High School in 1941. She did her part for the war effort by working in the Navy Yard during WWll. She met her pen pal Benjamin "Hervey" Varney upon his return from serving five years in World War II with the Army artillery. They were married on Christmas Day 1945. They had one child, a daughter, Attorney Gail Varney Catalfo of Gatlinburg, Tenn. who survives them.
Jeannette and her husband Hervey were proprietors of Varney's store in Farmington for many years. Hervey predeceased Jeannette when he died at age 53 in 1975.
Jeannette was a real estate broker. She worked for the Irene York Agency in Dover. In her later years she worked in the law office of her son-in law Attorney Alfred Catalfo Jr., where she managed his real estate and managed the clients waiting to see Fred. Many times, there was a defendant with their chair pulled up to her desk telling her their problems. She always had a sympathetic ear and kind words.
"My mother would share anything she had and forgive everyone. She never held resentments, if someone disappointed her, she would excuse them and did not take it personally. She was kind and loving to everyone. Her strengths were in her English skills, her memory for dates, times, persons, places, telephone numbers, addresses, spelling for which we relied on a daily basis. I am so fortunate to be her daughter and I am certain she was welcomed into Heaven with open arms."
She leaves her beloved family, daughter Atty. Gail Varney Catalfo, and Michael Wentworth with whom she resided, nephews Lawrence "Larry" Wentworth, Los Angeles, Calif., Stanton Wentworth, Colebrook, N.H., A. Raymond Varney and Gail, Rochester, N.H., nieces, Priscilla Roy Leblanc and Richard, Rochester, Jeannette W. Countryman, Las Vegas ,Nev., Bonnie Varney Lachance and Donald, Virginia Beach, Va., Barbara Jean Whithouse, Fla. Her extended family Atty. Alfred T. Catalfo III, Donna Labrie Hunt and Greg, Atty. Carole Catalfo, Dr. Jay and Dr Gina C. Mireault and good friends Pat Catalfo and Lee Sullivan.