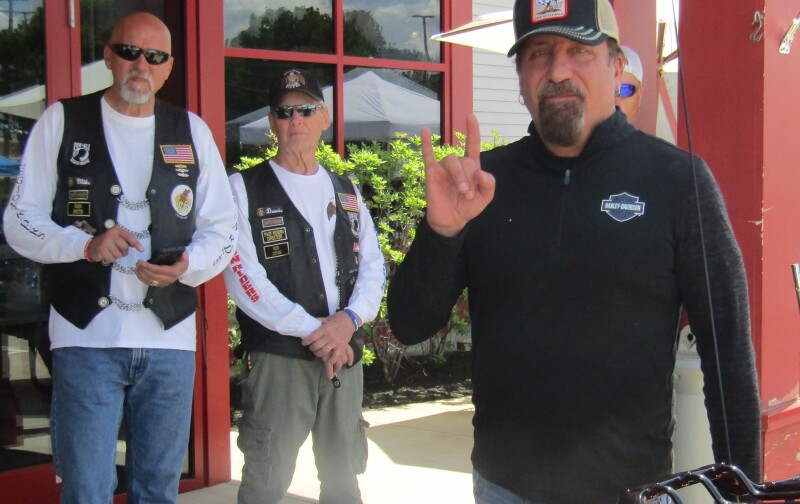 ROCHESTER - With southern rock band Jackyl frontman Jesse James Dupree leading the way, nearly 50 bikes thundered out of Harley Davidson of Rochester under bright sun onto Route 11 on Sunday to raise money for the New Hampshire VFW Unmet Needs program.
Dupree, whose band will play at the Granite State Music Hall in Laconia on Friday, told The Rochester Voice he was more than happy to lend a hand with the fund-raiser, which was hosted by Harley Davidson of Rochester.
"No one does more to help veterans than the VFW and Harley Davidson," he said.

Bikers plunked down $25 apiece for the pleasure of riding with Jesse and helping veterans in need.
The ride began with Rochester Police providing safe access to Farmington Road (Route 11), Little Falls and Chestnut Hill roads after which bike run road guards took over at busy intersections for the duration of the ride, which followed Betts Road to White Mountain Highway before heading east on

Applebee Road to Milton Mills and the back roads of Acton, Maine, before taking Route 109 east to Iron Tails Saloon.
Iron Tails was definitely ready for the hundreds who poured into the biker bar with several outdoor beer and food kiosks as well as their regular menu and waitstaff and bartenders inside.
The day of giving continued as Vouchers for Veterans took over the entire back bar area with an array of raffle tables.
Vouchers for Veterans President Jeanne Grover sat at the first table accepting donations for the program that ensures veterans are able to get free fresh vegetables and other produce in September and during the winter months.
A Vouchers for Veterans fund-raiser ride was also held on Sunday morning that began and ended at

Iron Tails, whose patrons last year donated some $42,000 to the nonprofit.
"They've been fabulous," said Grover, who told The Voice they raised $10,500 on Sunday.

Grover recently announced that this September they will be giving out vouchers at nine different farmers markets a week. Veterans can pick up vouchers once a week at their choice of Kennebunk or Sanford in Maine, and Portsmouth, Wolfeboro, Exeter,

Barnstead, Littleton, Rochester and Dover in New Hampshire.
And next January they we will be at a different Farmers market, giving out vouchers each week through April.
Iron Tails owner Gregg Martinez said earlier this month that he is blessed to have patrons who are so generous in their support of veterans.
Meanwhile, the VFW Unmet Needs program provides grants to active duty service members, veterans and their immediate families to assist with basic life needs.
As part of their fund-raiser Dupree, who is also in the liquor business, was expected to auction off a couple of signed bottles of his own Jesse James Bourbon.