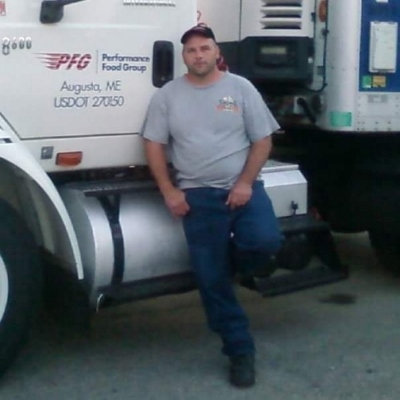 ROCHESTER - Joseph Leroy Aubut, 46, of Rochester, N.H., died unexpectedly on Wednesday, December 14, 2016, at Maine General Medical Center in Augusta, Maine. On September 5, 1970, in Belfast, Maine, the stork delivered him to Albert and Barbara (Perkins) Aubut saying, "This one's trouble, but he's your problem now." and vanished before either could protest.
Joe attended Belfast schools where, by the grace of God, he graduated in 1988. After graduation, he worked in Southern Maine before going to truck driving school. Realizing he would never have a career as a stuntman he began driving double bottom rigs. He worked for 14 years at Performance Food Service-North Center.
He met the love of his life, Lori Ellsmore, and on January 7, 2012, she took him off our hands when they got married.
Joe's hobbies include, shooting pool, darts, horseshoes, books on tape while driving, reading Dean Koontz novels and telling jokes.
His real passions, however, along with his wife, Lori, were riding motorcycles, refurbishing their house, and raising their grandson Zak.
Joe is survived by his wife Lori Aubut, son Joseph Aubut, daughter Hannah Aubut, three stepsons, Dustin King of Florida, Joshua De Meritt, and Jacob De Meritt both of Rochester, N. H., Father and step monster Albert and Diane Aubut, sister Tammy Aubut all of Biddeford, Maine, Mother Barbara Larrabee, brother John Larrabee both of Belmont, Maine, brother Jeremy Aubut of Buxton, Maine, brother Benjamin Aubut of Waterboro, Maine and stepsister Sheila Colson of Pittson, Maine, several nieces and nephews, two great nephews one great niece, and his grandson Zak.