Judge: Blackwater guard took 'all or nothing' gamble and got 'what he gambled for' 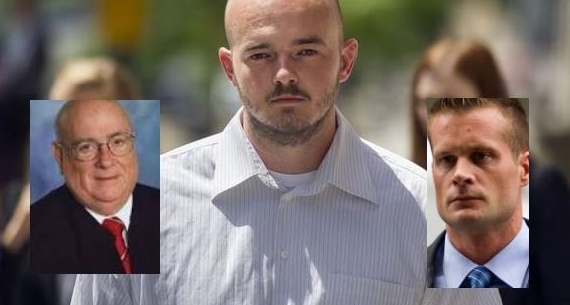 WASHINGTON - In what may foreshadow a tense resentencing next month for a Rochester man and two others imprisoned in the so-called Nisour Square massacre of 2007, the lone Blackwater guard found guilty of first-degree murder in the incident was sentenced to life in prison on Wednesday in federal court in Washington.

Brian Liberty of Rochester, N.H., whose son, Evan, is one of the three facing resentencing in September, was in federal district court to observe the sentencing.

"This was much more confrontational than the first sentencing," Brian Liberty said in a phone interview from Washington on Wednesday. "They (defense attorneys and defendant supporters) went after the prosecution; this was much more belligerent."

Nicholas Slatten of Tennessee, who was again given a life sentence, in his statement to the court, called the verdict a "miscarriage of justice that will not stand," according to the New York Times. Defense attorneys and family insisted the fight for justice is not over and they plan to appeal the verdict again.

Slatten's original guilty verdict was tossed by an appellate court and a second trial on murder charges ended in a hung jury before a third trial found him guilty once again, paving the way for Wednesday's resentencing.

Meanwhile, Evan Liberty, Dustin Heard and Paul Slough, the other three Blackwater guards charged in the so-called massacre, were originally sentenced to time served on manslaughter and other charges and 30 years on an obscure firearms charge designed to prosecute gang members and drug cartels from using machine guns in a crime.

Ironically, during the Nisour Square incident, the three were using automatic weapons provided them by the Department of State to protect diplomats visiting Iraq in 2007 during what many have called the deadliest portion of the Iraq War.

An appellate court tossed their sentences two years ago for "cruel and unusual punishment" and ordered their resentencing.

Brian Liberty said one of two former Blackwater guards who spoke said that the four were doing one of the most dangerous jobs in the world at the time of the incident. He spoke of one such encounter he lived through in which Iraqi insurgents had shot down a U.S. helicopter over Baghdad and executed the entire crew upon their crash landing. The ex-Blackwater guard said in the wartime chaos that was Baghdad at that time, it took them hours to even find the chopper and the bodies.

Evan Liberty's, Slough's and Heard's resentencing were also to have originally been on Wednesday, but U.S. Marshals, who are in charge of prisoner transport from federal prisons, asked for and received more time to bring them to Washington.

Meanwhile on Thursday Slatten remained defiant, telling the court that prosecutors had offered to let him plead guilty to a less-severe manslaughter charge, but that he rejected the offer because he was innocent.

But during sentencing Judge Royce C. Lamberth, who oversaw the 2014 trial, suggested that while that level of charge might have been appropriate, Slatten decided to take the "all or nothing" gamble of going to trial on a more serious murder charge, and "got what he gambled for," the New York Times reported.