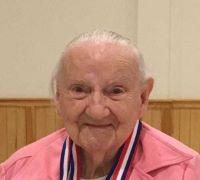 ROCHESTER - Julia Belle King Millette, born August 30, 1925, the oldest of 11 children to Irene and Harry King, passed peacefully at the Rochester Manor on Monday, November 9, 2020 where she resided since July 2019. She was 95.
She was predeceased by her husband, Adam M. Millette.
She is survived by three sons, Llewyllyn Millette and wife, Shirley of Rochester, Donald Millette and wife, Rachel of Barrington, and James Millette of Rochester; four daughters, Sharon Shannon of Barrington, Lynda Bryant of Florida, Priscilla Flood of Rochester and Rose Burrows of Strafford. She has 12 grandchildren, 19 great-grandchildren and two great-great grandchildren. Also three sisters, Rita Gray, and Shirley Hartford who reside at the Manor with her, and Cynthia King of Barrington, and many nieces and nephews.
Besides being a homemaker, she ran a 4-H Club the Wild Rose, for the Rochester Heights area. She was a member of the Salvation Army and active in the Home League. Before moving to the Manor, she participated in the day out program at the Rochester HomeMakers.