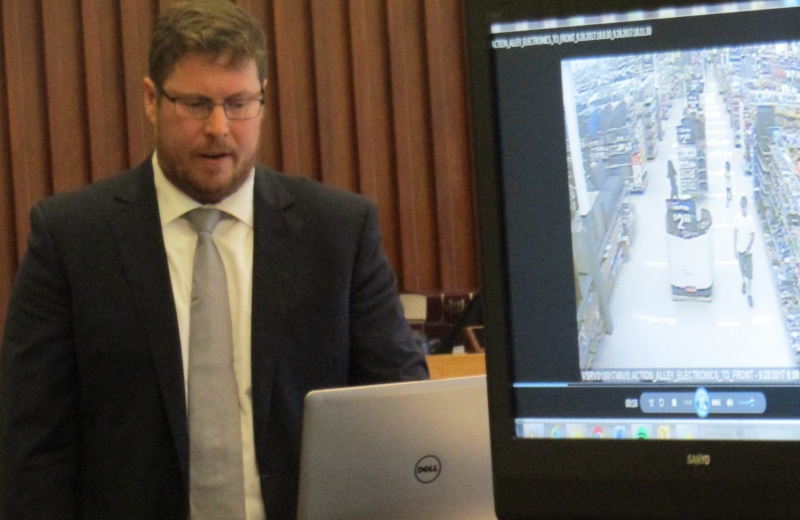 DOVER - It took a jury just a couple of hours on Tuesday to find a Maine man guilty of exposing himself in front of two young girls at the Somersworth Walmart in 2017.

Christopher T. Dastrup, 34, of South Berwick, now faces the prospect of up to 60 years in prison when he is sentenced in connection with the Sept. 28, 2017 incident.

Dastrup, as he has done all trial, showed little emotion on Tuesday during closing arguments. Following the verdict which was handed down around 3:30 p.m., he was remanded over to Sheriff's deputies for transport to Strafford County Jail, where he will remain prior to sentencing.

Dastrup was found guilty on four felony counts that each carry a maximum 15 year prison sentence: two for exposing his genitals to the two girls, ages 11 and 5 at the time of the incident; and two for touching his genitals in front of them.

In closing arguments defense counsel Sven Wiberg characterized the FBI-prepared compilation tape of the incident "prejudiced against his client" and said prosecutors edited the evidence to "get their man."

"They singled out the defendant," said Wiberg, who pointed out that the compilation tape showed "no mastubatory motion" and that the girls walked right by Dastrup after the alleged incident without any indication he'd done something wrong.

But Deputy Strafford County Attorney Tim Sullivan in his closing countered that assumption, saying the older girl ran by him without saying anything, "because she'd just seen an adult male's penis and was looking for her dad to tell him what happened and who did it."

"He was touching his crotch and looking at the girls," Sullivan added.

The trial featured often chippy interaction between Wiberg and Sullivan and on a couple of occasions, even Wiberg and Judge Mark S. Howard, who at one point asked the defense lawyer to be a little more "professional."

Wiberg, in turn, at one point claimed the judge had been critical of him the entire trial.

Dastrup, a registered sex offender in the state of Maine, was previously convicted of two or more similar offenses in Oregon.