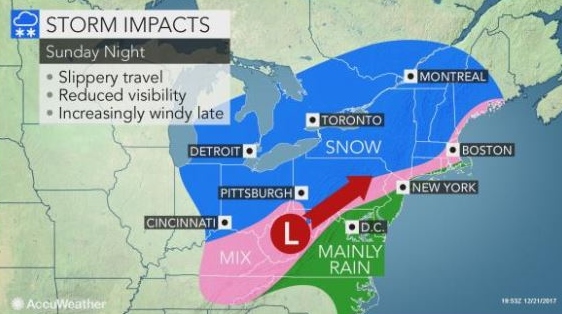 With the threat of three days of unsettled wintery weather before us, Richard Blake of Rochester was one of many who spent today getting the last of the supplies he and his wife will need through the Christmas holiday.

"We went to the market and we're all set. Now we're gonna hunker down and take it as it comes," said Blake, who lives in a mobile home park about a mile from The Ridge.

Beginning this morning as a few random flakes, the snow began picking up around 8 a.m. and could leave as much as eight inches on the ground before it's done later tonight.

With the long holiday weekend ahead of us and snow or ice predicted nearly every day through Christmas, shopping patterns have moved up a bit, said a Market Basket manager at The Ridge Marketplace.

As of 10 a.m. Accuweather was predicting up to 6-10 inches in the Northern Seacoast before the precipitation changes to freezing rain around 7 a.m. on Saturday.

The freezing rain and fog will continue most of the day Saturday followed by just plain rain by evening.

"I worry about the ice the most," Blake said.

Meanwhile, Rochester Public Works Director Peter Nourse said it will be all hands on deck for city plowing and sanding and they'll be ready for whatever Mother Nature throws their way.

The snow, ice and treacherous travel from this first storm could wreak havoc across New England till well into Saturday, Accuweather meteorologists predict.

The area gets a brief respite on Christmas Eve Sunday, but by nightfall Rochester and environs could get an additional 1-3 inches.

And for those hoping for the snow to fly on Christmas Day, fear not for we bring glad tidings. Yep, at least 2-4 inches of snow is predicted.