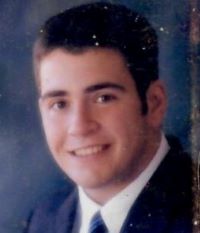 PORTSMOUTH - Justin Joseph Lachance, 41, died at Portsmouth Regional Hospital on Friday Dec. 11, 2020, after a period of failing health. Justin was born in Rochester on Nov. 30, 1979. He is the son of Jean Ann Lachance and his Dad, Roger, who predeceased him by three weeks passing away on Nov. 20.
Justin graduated from Saint Thomas High School in 1998 and Georgetown University in 2002, where he received a degree in Health Studies. He stayed in the DC area for 10 years working in the restaurant industry and continued in that field when he moved back home to New Hampshire. Ultimately, he ended up working with his Dad at his Dad's business Scrap Safe.
Besides his Mother, he leaves his wife, Arielle Degenring Lachance, his sister Jennifer and her husband John, his brother Jason and his wife, Amanda, two nieces, Kaitlyn Ford and Charlotte Lachance and one nephew, Will Lachance. He was also predeceased by his two sets of grandparents, Mr. and Mrs. Joseph Adams and Mr. and Mrs. Armand Lachance.
Justin had an infectious smile that could light up a room. He was known for his dry sense of humor and his kind heart. He loved his dogs, Winston and Bronson who have crossed the Rainbow Bridge and his puppy Otis who brought him comfort and joy.