Kaepernick keeps saying this country sucks, so why do people keep flocking here 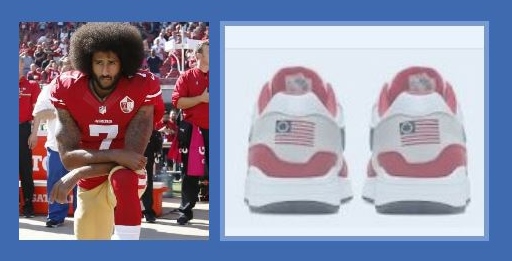 Kaepernick said it reminded him of slavery. A few years back the former 49er quarterback stopped standing for the National Anthem. He said he was protesting police brutality and racial inequality.

For a peripheral figure on the national political scene this guy keeps popping up and popping off about how bad this country is.

So if this country is so malevolent why are hundreds of thousands of people crossing into it illegally risking and sometime losing life and limb during their dangerous odyssey from the Northern Triangle of South America. And they're coming not just from there, but also from Africa, including many that have arrived for sanctuary in Portland, Maine.

Maybe Kaepernick should clue these people in how America sucks so much to dissuade them from their perilous trek. That is if he actually cares about them, or believes the statements he has made.

In fact, Kaepernick could say this country remains a racist pit of fascism and they'd still keep coming.

Why? In this day and age when social media reaches across the world and cultures, people in Ecuador, Somalia and Indonesia all know the real truth, that America is a very desirable life destination.

Even those folk thousands of miles away know that this country is the greatest on Earth.

But don't worry about the unemployed Kaepernick. He's parlayed his nonplaying days in the NFL into several million dollars in a collusion lawsuit against the NFL. Football been berry berry good to me.

You see it's all about the Benjamins; even though he owned slaves, too, Kaepernick has found it within his heart to accept them.

So Colin, quit raining on our 4th of July parade. Take your mouth and your millions and go find your nirvana. And when you find it let us know, so we may seek sanctuary there.