'Kindergartener couldn't scrape the 'whiteness' off his skin' 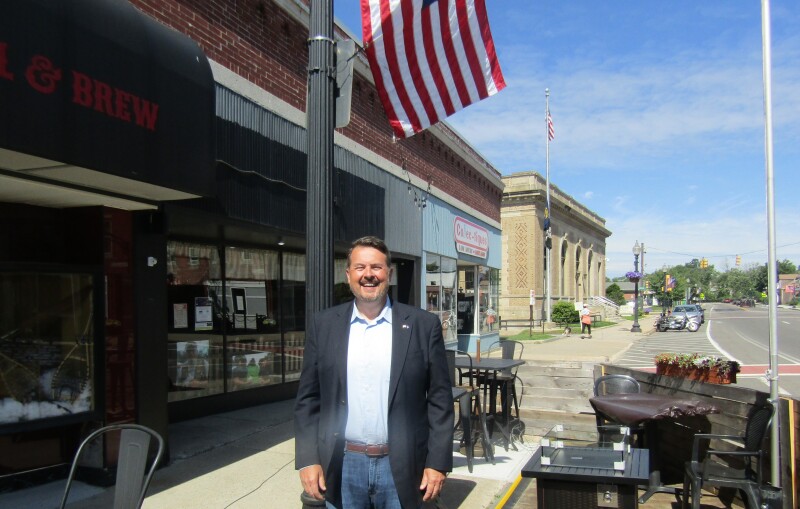 ROCHESTER - Thad Riley of Brentwood says critical race theory and gender identity are both being taught in New Hampshire public schools, and Gov. Chris Sununu "is doing nothing about it."
"The governor won't take a stand against this," said Riley, who hopes to win a primary victory against Gov. Sununu in September. "He should get out there, advocate and call a press conference like (Florida governor Ron) Desantis, but he won't. He doesn't care nothing about it."

Riley, a former SAU 16 school board member who works in the exercise video industry, said he knows Sununu won with 65 percent of the vote in his last election, but "there is a window," he believes.
He said what's being taught in New Hampshire public schools is appalling.
"I have four kids in public schools and they're getting stuff on both CRT and gender identity," Riley told The Rochester Voice during a stop in Rochester on Tuesday. "It's heartbreaking. I had one dad tell me that his son, a kindergartner, was exposed to CRT and was told he had white privilege that hurt other people. When he got home he was trying to rub the whiteness off his skin. 'I can't get it off,' he cries," he said the dad told him.
As far as gender studies, Riley believes the moment a student brings up a question about their sexual identity, the teacher or guidance counselor should pull them aside and explain they want to get their parents involved in whatever is bothering the child.
Riley said the state Department of Education is getting a lot of complaints about the schools, but they're not enforcing current regulations. He said he's heard on good word that some 9,000 students have left the state's public school systems in the last two years.
"The parents and many of the teachers are sick of these ideologies," he said. "They just want to be teachers." He also said he would scrap common core.
Riley, who does a lot of work at his church, calls Sununu a typical career politician like Joe Biden and Nancy Pelosi, "all seeking to fatten their bureaucracy."
He chided the governor for keeping liquor stores open while shuttering churches as the pandemic began and for saying he'd veto the parental rights bill before it even got to his desk.
He said he also wants to raise the amount of funding aid for those who home school or send their kids to religious or private schools.
Riley said he is raising money at a good rate and has some 100 volunteers with top advisers who helped on Trump's election team.
"I'm not anti-Sununu or Biden, I'm just anti career politicians," he said.
Also running n the Republican primary are Julian Acciard, Jay Lewis, Richard McMenamon II and Karen Testerman.
To see more about Thad Riley click here.