Knowing me and knowing you, you're gonna love 'Mamma Mia' 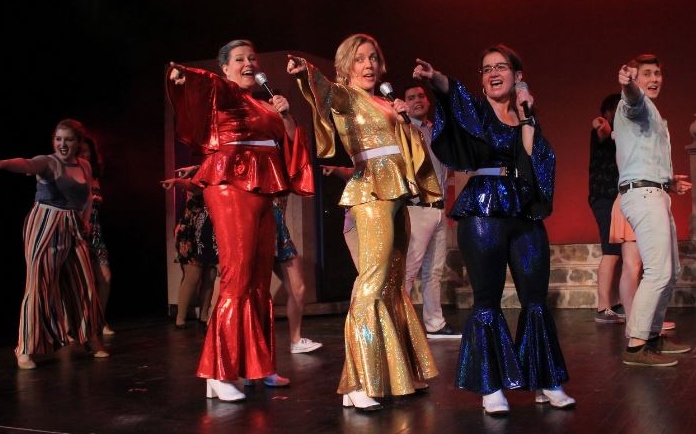 From left, in red, Sarah Souter, Linette Miles and Christa Prescott Bellmare are in the thick of the action during Friday night's performance of 'Mamma Mia!' (ROH Facebook photo)

A lot can be said about a play by how you feel leaving the theater when it's over.

With "Mamma Mia!" - now playing at the Rochester Opera House - it'll be with a smile on your lips and a laugh in your belly.

"Mamma Mia" is unbridled fun accompanied by the joyful music of ABBA, whose songs of romance and heartbreak reverberate through the Opera House rafters thanks to an exuberant cast, stunning choreography and perfectly paced direction by Steve Small.

Mamma Mia has been done on Broadway and film for decades, but its allure seems to have only grown as each new generation finds something to like about a madcap wedding on a Greek island in the Mediterranean.

The plot is simple: a girl about to be married who is brought up by a single mom discovers in her diary that she dated, or "...-ed" three separate guys near the time she would have been conceived.

She wants to be walked down the aisle by her rightful dad, so she mails them all invitations to the wedding.

In short ... sit back and enjoy the high jinks, the music and the fun.

Along the way there will be some tender moments, some racy scenes and some downright "blue" repartee.

But who cares. It's a wedding on a Greek island, for gosh sakes, and we can do what we want!

Standing out in this talented cast that includes ROH Executive Director Anthony Ejarque who plays one of the potential dads, is Linette Miles who delivers a knockout performance, nailing the vocals and emotion in a stunning "SOS" number in Act II that had a packed ROH roaring.

Other scintillating scenes that stand out are the Voulez Vous choreography and singing at the end of Act I and the Closing number that is an homage to the Swedish supergroup.

Regarded by most as very much a female-driven play - what wedding story isn't - potential dads Ejarque, Samuel Bennett and Steven Michaels "man up" in the curtain call, dressing to the nines in a spectacle you don't want to miss.

Lots of dance, lots of music, lots of fun, lots of ABBA. And guys, you'll like it, too!

The Rochester Opera House is sponsored by TD Bank North, Eastern Propane, Shaheen & Gordon P.A., and Norm Vetter Foundations. This show runs through Feb. 2 and is sponsored by Studley's Flower Gardens and The Rochester Voice. For ticket purchasing and more information, call (603) 335-1992 or visit www.RochesterOperaHouse.com.