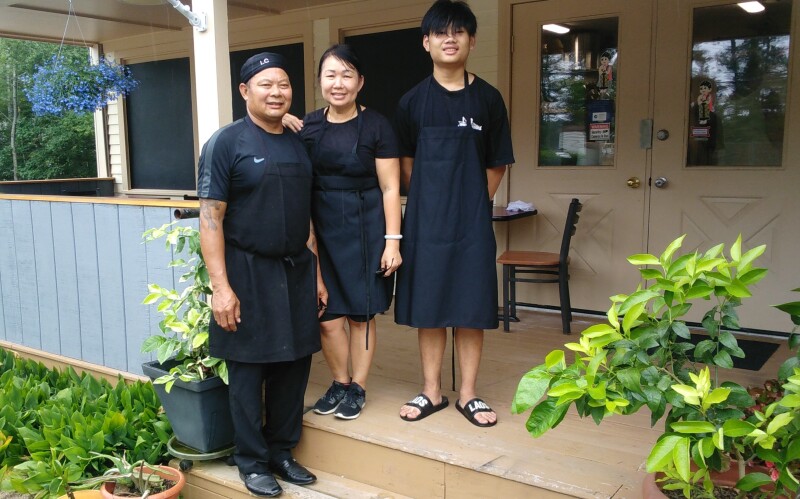 Infeng and Air Vongsay with their son, Bo outside their Lakeside Thai Kitchen on St. James Ave. in Milton (Rochester Voice photo)

MILTON - A family run Thai restaurant whose owners formerly opened businesses in Newmarket and Dover opened their newest eatery today at the site of the former St. James Avenue (Five Corners) convenience store that closed soon after a local interstate bridge was removed in 2012.
Ironically, just as New Hampshire DOT workers were collecting ground samples at the end of Town House Road in advance of the bridge's impending replacement, the Lakeside Thai Kitchen was holding its grand opening in the same building that closed due to the bridge being taken down almost a decade ago.
And Infeng Vongsay and his wife, Air, couldn't be happier opening their newest eatery, which isn't far from property they own on Milton Three Ponds, she said.
She said they owned a Newmarket restaurant, the Basil Leaf, for 35 years and later opened one in Dover before deciding to establish their newest eatery here in Milton.
"We are bringing authentic Thai food to Milton that will focus on freshness," Air Vongsay said.
She said they have adjusted to Western tastes that might not like their food heavily spiced.
"We have a 1-5 seasoning level," she said. "I prefer a 2."
Some of their specialties include Pad Thai, likely one of Thailand's most popular dishes, which comes with a choice of protein plus rice noodles fried with an egg, fresh bean sprouts, scallions and ground roasted peanuts.
Air Vongsay said they also take pride in their curry and other Thai favorites like General Thai chicken, which is sauteed chunks of crispy chicken served in a sweet and sour sauce on a bed of steamed broccoli, carrots, red and green bell peppers and onions; and their Pho soup, which is beef broth with fresh bean sprouts, basil leaves, cilantro and scallions.
Lakeside Thai Kitchen is located at 5 St. James Avenue in Milton.
They're open seven days a week Monday through Saturday from 11 a.m. to 9 p.m. and Sunday from noon-9 p.m.