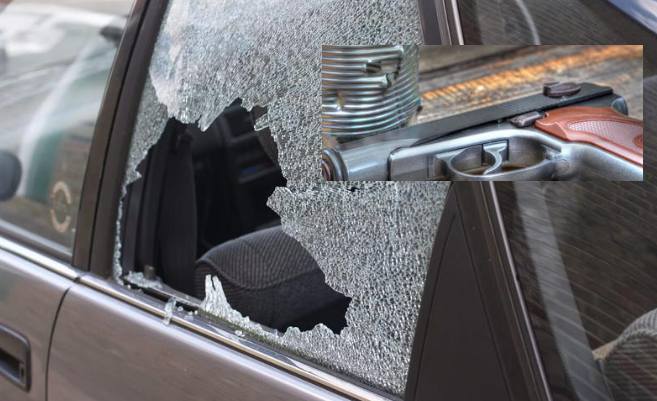 Rochester Police say they do see occasional sprees of windows being shot out like the one seen above, or mailboxes shot at; inset, a typical bb-gun pistol (Courtesy stock photos)

ROCHESTER - Gunplay, even with bb guns, can result in jail time, a Rochester Police Captain said earlier this week.
The warning comes after three incidents in two days in which city residents complained of being shot at by what are generally considered nonlethal weaponry.
On May 22, a man came into the police station lobby to report he'd been hit in the back with a bb gun bullet by teens driving by him in a small white hatchback around 12:35 a.m. in the area of South Main and Wakefield streets. The victim declined medical attention, and police failed to locate the vehicle during a downtown search.
Then on Monday a Madison Avenue resident called police around 7:20 a.m. to say that someone had just shot his car window with a bb gun.
Later than night a Pleasant Street resident said they were shot at with a bb gun while sitting by a campfire. Another caller from the area called to say they heard the shooting and the suspects were in a red car headed toward the Lilac Mall. Several police officers checked around the mall but found nothing.
Referring to the shooting on May 22, Rochester Police Capt. Todd Pinkham said bb shootings are rare.
"We don't take many bb gun calls like this, where someone gets hit," he said. "Of the calls where someone gets hit, the majority are hit by accident while someone is just shooting at a target or non living object. "
He said, however, they do occasionally "get sprees of windows being shot out or mailboxes shot at, but nothing recently, just one or two here and there."
Pinkham said depending on the situation the perpetrator could face misdemeanor simple assault if they hit someone, misdemeanor criminal mischief if they damage someone's property or violation of city ordinance for shooting in a compact area of town such as the downtown.
Simple assault can result in a 12-month jail stint, which criminal mischief or city ordinance violation could result in fines.
However, If a bb or air soft gun is used in the commission of an armed robbery it can result in felony charges that carry up to a 15-year prison sentence.