Lebanon man accused in Jan. 6 unrest will take his chances with a judge, not a jury 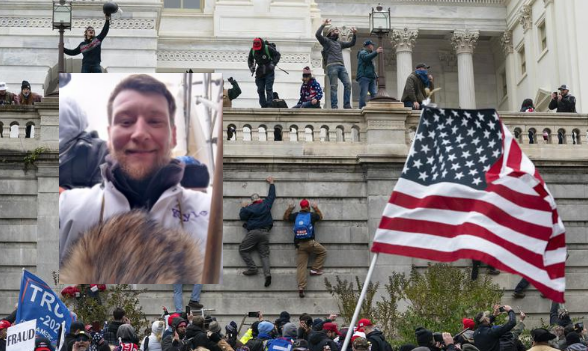 Kyle Fitzsimons, inset, has elected to have a bench rather than jury trial over his role in the Capitol unrest of Jan. 6, 2021. (inset photo/Courtesy; Background photo/AP News). (

WASHINGTON - The Lebanon man indicted in the Capitol unrest of Jan. 6, 2021, has agreed to a bench trial that is now scheduled for August in the U.S. District Court for the District of Columbia.
Kyle Fitzsimons, 38, of Lebanon, Maine, was arrested on Feb. 4, 2021, at his Gully Oven Road home. He's been held at DC Central Detention Facility since late March 2021.
The bench trial will likely take two to three days, according to Assistant U.S. Attorney Mike Gordon, one of the prosecutors in the case.
" Mr. Fitzsimons is requesting a bench trial. He may still change his mind (again), but that is where things currently stand," Gordon told The Rochester Voice on Friday.
A bench trial is similar to a jury trial in most respects, but in this case the judge will determine whether the prosecutors have sufficiently proved their case beyond a reasonable doubt..
A superceding indictment filed in May accuses Fitzsimons of "using a dangerous or deadly weapon on certain officers" in that he "did forcibly resist, oppose, impede, intimidate, interfere and use a dangerous or deadly weapon on an officer and employee of the United States ... an officer from the Metropolitan Police Department."
The original 10-count indictment filed against Fitzsimons in February 2021 alleges the husband, father of one and former Hannaford butcher with obstruction of an official proceeding, entering and remaining in a restricted building or grounds, disorderly and disruptive conduct in a restricted building or grounds, engaging in physical violence in a restricted building or grounds, disorderly conduct in a Capitol building or grounds, act of physical violence in the Capitol grounds or buildings, two counts of civil disorder and two counts of inflicting bodily injury on certain officers.
Fizsimonss pleaded not guilty on all charges during an April arraignment, which came more than 10 weeks after his arrest in Lebanon.
A final pretrial hearing is set for Aug. 5 with the bench trial to follow on Aug. 16.