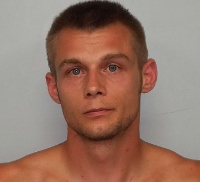 SANFORD, Maine - A Lebanon man will face arraignment today after his arrest on Tuesday following a domestic incident.

Larue was arrested after police responded to Sunset Road around 8:05 p.m. for a reported domestic disturbance, Sanford Deputy Chief Tim Strout told The Rochester Voice. Investigation led to the arrest of Larue who is accused of strangling the female victim and damaging the window of her 2003 Buick sedan.

Larue was charged with aggravated assault and criminal mischief.