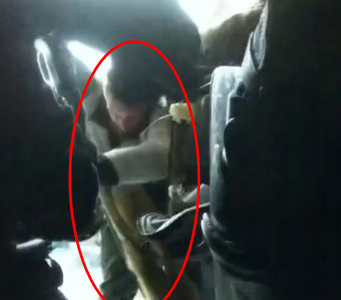 Prosecutors say this still photo captured by an MPD body camera on Jan. 6 shows Kyle Fitzsimons lowering his shoulder and charging at a police line under a Capitol archway.

WASHINGTON - The Lebanon, Maine, man charged in the Capitol unrest of Jan. 6 had a status conference in a District of Columbia courtroom on Friday during which his defense counsel withdrew from the case.

Defense attorney Greg Hunter wrote in his motion that he and co-counsel Joel Anders had both been asked to withdraw so that Kyle Fitzsimons, 37, could be represented by a federal public defender.

In the motion Hunter noted that "this case is still at a very early state - discovery has only just begun and a trial date has not yet been set ... co counsel may withdraw without prejudice to the defendant or the United States."

Judge Reggie B. Walton approved the motion for counsel to withdraw.

Fizsimons, who is being held on no bail, pleaded not guilty on all charges during an April arraignment, which came more than 10 weeks after his arrest in Lebanon on Feb. 4.

Walton also approved the time from Friday's hearing till another Status Conference on May 21 to be excluded in connection to any and all speedy trial obligations.

Fitzsimons was arrested on Feb. 4 in Lebanon and waived his right to detention and probable cause hearings in Portland on Feb. 11. He was then transferred to a Rhode Island Detention Center until late March when he was transferred again to the DC jail where he remains.

Conversely in his motion to be dismissed from the case Hunter noted, "This case is still at a very early stage - discovery has only just begun."