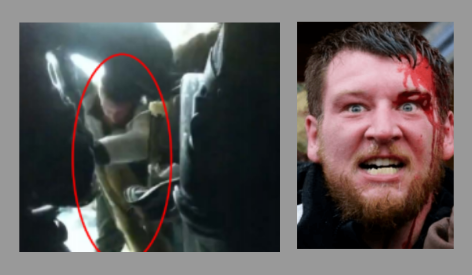 Surveillance image of Kyle Fitzsimons under Capitol archway, and at right after being struck during melee.

WASHINGTON - The June trial of a Lebanon, Maine, man imprisoned in the Capitol unrest of Jan. 6, 2021, was postponed earlier this month and will be rescheduled on Wednesday at the U.S. District Court of the District of Columbia.
Prosecutors say they expect it will be rescheduled for July.
Kyle Fitzsimons, 38, was arrested without incident on Feb. 4, 2021, as a handful of unmarked black SUVs arrived at his Gully Oven Road home. He's been held at DC Central Detention Facility since late March 2021.
A superceding indictment filed in May 18 accuses Fitzsimons of "using a dangerous or deadly weapon on certain officers" in that he "did forcibly resist, oppose, impede, intimidate, interfere and use a dangerous or deadly weapon on an officer and employee of the United States ... an officer from the Metropolitan Police Department."
The original 10-count indictment filed against Fitzsimons in February 2021 alleges the husband, father of one and former Hannaford butcher with obstruction of an official proceeding, entering and remaining in a restricted building or grounds, disorderly and disruptive conduct in a restricted building or grounds, engaging in physical violence in a restricted building or grounds, disorderly conduct in a Capitol building or grounds, act of physical violence in the Capitol grounds or buildings, two counts of civil disorder and two counts of inflicting bodily injury on certain officers.
Fitzsimon's public defender, Natasha Taylor-Smith, filed a brief in October asking that the trial venue be changed to Maine due to the heavily politicized environment in D.C., but the court denied the motion in December.
U.S. Attorney Matthew M. Graves argued that the defense motion on venue should be "denied as premature," adding venue transfer should only occur after a jury pool is shown to be prejudice, not before.

Fizsimons pleaded not guilty on all charges during an April arraignment, which came more than 10 weeks after his arrest in Lebanon.
He was denied bail during his initial detention hearing on April 7, 2021, with Magistrate Judge G. Michael Harvey of the U.S. District Court for the District of Columbia presiding.
During the hearing, however, Harvey pressed Assistant U.S. Attorney Puja Bhatia as to why no plea deal had been offered Fitzsimons.
"Why no plea deal, the government doesn't need more investigation for this case," Harvey said adding that Fitzsimons was not part of any organized violence like the Proud Boys or Oath Takers.
"This is not a complex case," he added. "Three months in, no plea?"
Fitzsimons faces more than 40 years in jail if convicted on all counts.