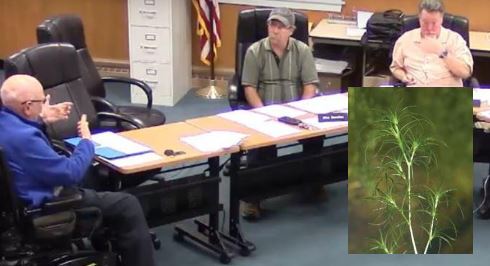 MILTON - Milton and Lebanon will likely have to come up with some town funding to help eradicate an invasive plant that threatens the Milton Three Ponds.

The European Naiad, which was first spotted in August of last year, has tightened its grip in Northeast Pond, the channel heading to Depot Pond and in Depot Pond as far south as Pickerel Cove and Pleasant Point on the Lebanon side.

Norm Turgeon, president of the Three Ponds Protective Association, said earlier this week those efforts to staunch the growth of the Naiad fell short this summer and that only about 40 percent had been successfully removed from a large swath of Northeast Pond, while some had grown back while spreading to other areas of Milton Three Ponds.

With losses in tax money and home values a clear and present danger, Turgeon has urged selectmen in both towns to work toward trying to get town money approved to continue eradication efforts next year after Maine and New Hampshire paid this past summer's costs but may not continue funding of the project.

He said the towns will likely need to raise about $30,000 between them toward the eradication effort next summer and that more money and eradication efforts could be necessary for years to come.
"It's like dandelions," Turgeon said. "It's an ongoing thing."

While efforts this year relied heavily on divers using suction harvesting equipment, next year they expect to use a herbicide, a much more effective antidote, Turgeon said.

The European Naiad is an extremely aggressive, invasive aquatic plant that could displace native plants and fish and render the lake unusable for fishing, swimming and boating, Turgeon said.

Lebanon selectmen agreed last month to look into town funding and a possible warrant article next spring, with Milton selectmen on Monday promising to move forward in similar fashion, with a possible ballot question next March.

Milton selectmen agreed unanimously that Three Ponds is Milton's "engine" and that it was vital that it be kept pristine for the sake of the town's economic base and its residents.