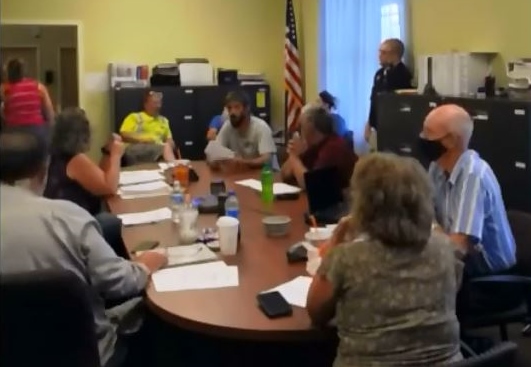 Lebanon appeals board chair Deborah Dorey Wilson, in red, moves to close the door as resident Terri Poirier tries to keep it open, insisting it's illegal to close the door to an open meeting. (YouTube video capture)

LEBANON, Maine - The decision on whether to charge the Lebanon appeals board chair with assault in connection with a fracas during a selectmen's meeting last month is now in the hand of the York County Attorneys Office.

Lt. William G. Ross, commander of Troop A in Alfred, said on Wednesday that after viewing video evidence and assessing witness statements taken at the scene shortly after the Aug. 20 incident he had come to the conclusion there wasn't enough evidence to arrest appeals board chair Deborah Dorey Wilson, who was accused of assault by town resident Terri Poirier.

"We couldn't see evidence of an assault in the (YouTube) videotape," Ross said. "Whatever happened is obstructed by people getting up to intercede."

He said witness statements taken at the scene "muddied the water" further.

Ross said while both Poirier and Wilson allege they were assaulted, only Poirier wanted to press charges.

Ross said now it will be up to the county attorneys office to determine whether Poirier has "probable cause" that an assault occurred.

The alleged assaults occurred on Aug. 20 after Wilson attempted to close the door to the selectmen's office under protest from Poirier who stood in her way.

Poirier, who was listening to the meeting through the open door to the lobby, said the ruckus began when she heard Selectboard Chair Chuck Russell, who is now facing a recall vote, tell Wilson to close the door.

"You can't close the door, it's a public meeting," she says on the videotape.

The live-streamed YouTube feed shows the incident unfolding at the 16-minute mark.

After Wilson approached the door to shut it, Poirier said she leaned up against the door to keep it open and was violently chest-bumped by Wilson.

"You wanna get in my face?" Wilson can be heard saying as she squares off with Poirier just prior to the altercation.

"I went up to the door to keep the door open," Poirier said last week. "She came at me, chest bumped me, and pinned me between her and the door. She then reached up over the door and tried to pull the door shut with me still standing in the way."

Poirier's body is mostly out of camera view once the altercation begins.

She said the incident left her with a sore right foot from being folded backwards. A person at the meeting helped separate them.

The live streaming video was shut down during the melee after Selectmen's Secretary Lynn Davis-Gilmore was told to do so at the direction of Selectman Paul Philbrick.

Philbrick said he made the decision to turn off the live feed on his own.

"I take the responsibility for having the camera turned off," he told The Rochester Voice.

Philbrick said he made the move to "calm down the situation," but his voice is inaudible as he points to the video hardware and directs Davis-Gilmore to turn it off.

To view the meeting altercation go to the 16-minute mark. The video can be viewed here.