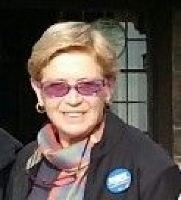 MILTON MILLS - Lenore Ryde Ekwurtzel (Smith), 64, wife of James A. Smith of Milton Mills, and mother of Brett R. Smith of Portsmouth, N.H., died unexpectedly on Friday, November 18, 2016, at home. Lenore was born October 11, 1952, in New Britain, Conn., and grew up in Kensington, Conn.
She earned her Associate's Degree in Animal Husbandry at UNH where she taught Light Horse Science and Horse Judging at the Thompson School. She had an extensive circle of friends in the horse world and was a valued mentor to many.
In addition to Jim and Brett, Lenore leaves two sisters, Joanne E. Coghill and husband John of Windsor, Conn., and their two sons and two grandsons, Vivian E. Horton and husband Richard, their two daughters, a son, and two grandchildren. She also leaves her sister-in-law, Joanne A. Beaulieu and husband Norman of Farmington, and their son, daughter-in-law and granddaughter of Rochester. She also leaves her in-laws, Phyllis Smith-Pierce and Wesley Pierce of Barrington.