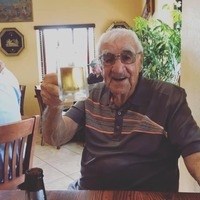 BRINY BREEZES, Fla. - Leonard W. D'Errico of Briny Breezes, died March 29, 2021, age 91. Beloved husband and soulmate of Barbara Nadeau D'Errico of 63 years. Loving father of Dino (Janet) of St. Cloud, FL; Diana (Andrew) Hauser of East Norwich, NY; Tony (Jenny) of Bonita Springs, FL; and Gina (Mike) Brennan of Orlando, FL. Adored Grandpa of Nicholas (Ashley) D'Errico, Michael (Chelsea) D'Errico, Nicole and Ryan Hauser, and Christina and Michael Brennan. Len also leaves behind a big family including many nieces and nephews. "La Famiglia!" was his favorite expression, as his family was his pride and joy.
Born in Providence, R.I., he was the son of immigrant parents and one of 9 children. Recruited to Boston University, Len played football then became Assistant Football Coach, while obtaining his Masters in Physical Education.

His career included teacher, coach, and Athletic Director at Spaulding High School in Rochester, NH; teacher and football coach at Oyster Bay H.S. in Oyster Bay, NY; and Defensive Coordinator at NY Institute of Technology in Brookville, N.Y. He was inducted into the Boston University Hall of Fame, the Oyster Bay High School Hall of Fame, and the Spaulding High School Hall of Fame. Len was also a member of the Italian American Citizen's Club of Oyster Bay and the Knights of Columbus.
Len retired to Briny Breezes, Florida where he was active in the Chiselers Club and was instrumental in building the Briny Breezes pool cabana. He had another small moment of fame, when he had a role in the 2005 movie, "In her Shoes."
In addition to his family, Len was best known for his generosity and his passion for football, food, friends, and all things Italian. He had a big presence and an even bigger heart.