Little Havana a Cuban testament to entrepreneurship and patriotism 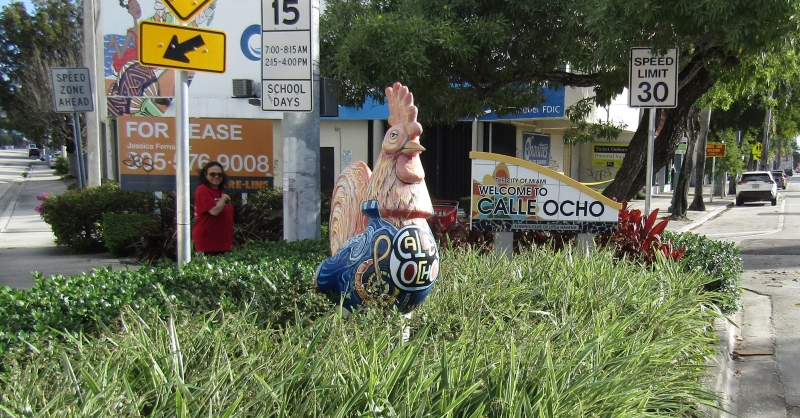 COLORFUL CROWDPLEASERS: These statues of roosters can be seen all over Little Havana part of a 2002 art project by the late Cuban sculptor Tony Lopez. (Rochester Voice photos)

Editor's note: This is another in a series of articles about The Rochester Voice's recent visit to Miami

The community stretches several miles west of downtown Miami, with Calle Ocho, or Eighth Street, the main artery through this Cuban enclave, where the smell of Cuban coffee and hand-rolled Cuban cigars punctuate the city air.

A midday walk through Little Havana is a cornucopia of smells and visuals with boutiquey cigar factories, gift shops and Cuban bistros and bars dotting the landscape. Tours and tour buses carrying tourists from all over the world mean a steady infusion of commerce and cash for the many shopkeepers and restaurant owners.

Domino Park, the heart of the district, stands as a

testament to the Cuban exiles who settled here after realizing the Castro regime would not be quickly overthrown as they had hoped when they first arrived from the island nation.

Now it is a place of talking politics and playing dominoes, with old and middle-aged men the predominant players, many of them playing for bragging rights, many others playing for cash.

Near the park is the Cuban Walk of Fame where patriotic Cubans from the past are honored, their memory enshrined in plaques and monuments.

Among those enshrined is Jose Marti, a 19th-century renowned Cuban poet and writer who fought for his native country's freedom from Spanish imperialism.

as a de facto Communist, but the exiles who fled Cuba in the 1960s say that was an aberration, that Marti approved of a U.S.-type democratic form of rule and lauded America's fight for independence from England in the 18th century.

As a result, Marti is revered by Cubans all over the world for his work at shedding the bonds of Spanish rule, something he died fighting for.

A tour guide explaining the Cuban political mindset noted that after the disastrous Bay of Pigs invasion in 1961, Cuban exiles saw President Kennedy as someone who

had betrayed them and since then, they have remained overwhelmingly supportive of the Republican Party.

They remain a conservative, hard-working and enterprising lot, full of entrepreneurship that can be seen firsthand in Little Havana, where nearly 100 percent of the businesses are Cuban-owned while their population percentage has shrunk from 80 percent to 60 percent in the past several decades.

Much of the more recent immigrant population is from Central America, but the area's culture remains distinctly Cuban.