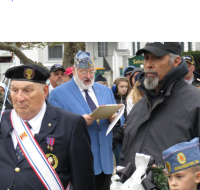 ROCHESTER - The longtime chaplain of the Rochester Veterans Council and organizer of Rochester's Memorial Day Parade and Veterans Day observances has died.

"His wife, Brenda, also played, and when they moved to Rochester, they began playing (echoing) taps down at City Hall where we used to hold several veterans observances like VJ Day, Armed Services Day and Pearl Harbor Day," Sanborn said.

Oliver was named Chaplain of the Rochester Veterans Council about five years ago, Sanborn recalled, which meant he was in charge of organizing both the Memorial Day Parade and the Veterans Day observance.

Sanborn said Oliver was very active in veterans affairs including participating in the 100 Nights of Service when 100s of buglers play taps at the New Hampshire Veterans Cemetery in Boscawen to honor veterans buried there.

According to his obit, he also enjoyed making the remembrance books for the American Legion in Rochester, for which he was nationally recognized.

Michele Grant, secretary of the Rochester Veterans Council, said Oliver was a tireless worker for veterans and worked with school ROTCs, Post Everlasting, and flag retirement burnings at Riverside Rest Home in Dover.

She said Oliver had been ill for a time last year, but had recently returned to meetings.

"He took his involvement with the Veterans Council very seriously," Grant said.