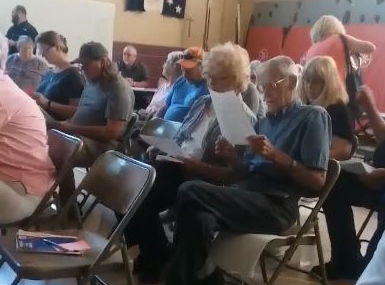 More than 140 turned out for a Special Town Meeting in Lebanon on Saturday. (Rochester Voice photo)

LEBANON, Maine - More than 140 turned out on Saturday as Lebanon held a Special Open Town Meeting to rescind several warrant items from its June vote and to present alternative budgets for those that had been rejected by voters.

The changes were all part of an effort to reduce budgeted items put on the ballot by the former board of selectmen so to increase spending on town roads, said Selectperson Corinna Cole.

All 15 articles, including budgets restoring funding for codes and animal control passed with overwhelming support.

Cole said the new board "worked hard to reduce budgets" that were turned down at the June vote, and that the only budget increases were modest amounts for education for the Appeals Board and signage for the Conservation Committee.

The meeting was moderated by former state Sen. Richard Nass of Acton.