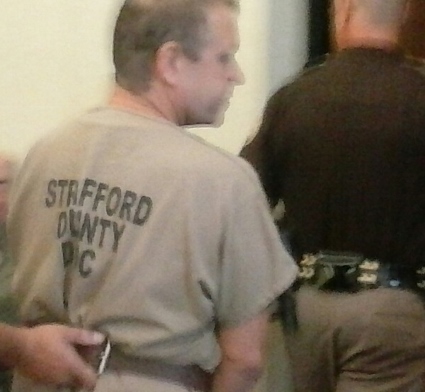 DOVER - The despicable nature of a Springvale man's pattern of sexual abuse of a young girl may have screamed for public excoriation, but Strafford Superior Court Judge Steven M. Houran during sentencing today chose instead to focus on the girl's bravery, refusing to call her a "victim" but rather a "survivor" of four years of predatory perversion by a man she trusted.

Christopher Lunny, 44, of 45 Ellsworth St., who just a week ago was out on personal recognizance awaiting a jury trial on five counts of felonious sexual assault, made an about face on Wednesday, accepting a plea deal that will keep him behind prison bars for at least 25 years.

Lunny, his hands and feet shackled and dressed in brown standard-issue jail garb, often looked at family members during the hour-long sentencing and victim impact statements, but said nothing and showed no emotion, a far cry from the victim's family who often openly wept.

In a prepared statement one member of the victim's family said the young girl, who was brutalized between the ages of 5 and 9, had shown great courage coming forward "to put you (in jail) so you will never hurt another child."

Houran said the victim, now 16, showed , "courage, strength and resolve" coming forward like she did years after the abuse.

The bizarre end to the two-year-old case plagued by court continuances and motions came to a frenetic end in the past seven days beginning when Lunny attempted to obtain a phony passport and flee to Canada.

His attempt at flight ended when U.S. Marshals picked him up at his Springvale home around 8:15 p.m. on Saturday..

Assistant Strafford County Attorney Alysia Cassotis told Judge Steven Houran on Tuesday that Lunny, who had been fitted with a GPS to monitor his movements while out on bail, had been placed Friday afternoon a week ago at the National Passport Center in Portsmouth where he tried to get an emergency passport in his brother's name.

He reportedly told the clerk his brother was in Canada and had had a stroke.

When Lunny pressed the clerk that the passport be delivered overnight instead of waiting a couple of days, they did an Internet search on his name and noted the news accounts of his upcoming trial, prompting his arrest.

Lunny was arraigned on fugitive from justice charges on Monday in Springvale District Court and returned to New Hampshire where his bail was revoked.

It was just two days later that Lunny decided to accept a plea deal and change his plea to guilty, saving the state the expense of a trial and the girl the trauma of testifying.

The victim, herself, didn't speak, but she and her family were in the courtroom today, afterward lingering in the courthouse's upstairs hallway dabbing tears and comforting one another.

Houran acknowledge that Lunny's pleading guilty on Wednesday was significant because by doing so he admitted what happened is his "responsibility and not hers."

Lunny was indicted in June 2014 on five counts of aggravated felonious sexual assault, a special felony due to the victim's age. Each count could have resulted in a 10-30 year sentence.

Court records allege he engaged in a pattern of sexual abuse of the girl in Rochester between 2004 and 2008, including rape and other various sexual acts.

Lunny will also have to undergo a Sexual Offender Program evaluation after which a program of treatment - that could last a lifetime - will be prescribed.