Lydall, feds, state and Rochester all dug in to make Friday's groundbreaking happen 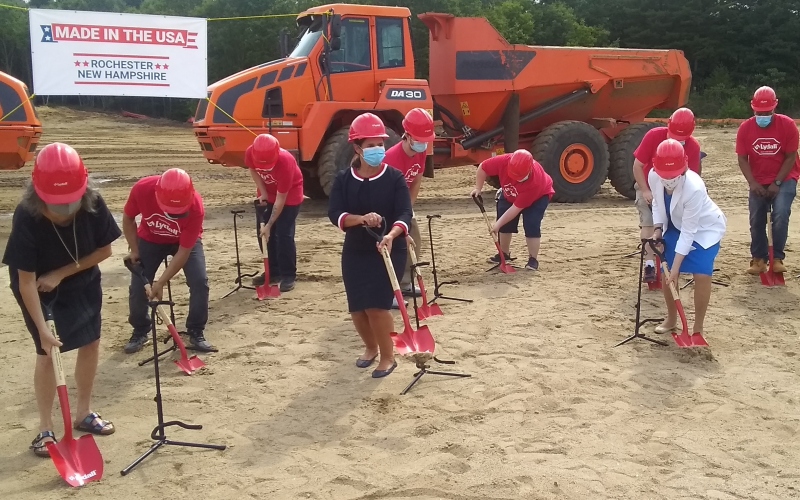 ROCHESTER - By next May Lydall's Rochester plant on Chestnut Hill Road will be North America's largest producer of COVID-19 fighting filtration systems vital to the making of N95 and surgical masks.

"Face masks are the 'armor' that protects Americans from contracting COVID-19," said Sara A. Greenstein, president and CEO of Lydall, moments before a groundbreaking ceremony for a Lydall expansion facility that will house two new production lines.

The expansion comes as a result of Lydall recently signing a $13.5 million contract with the United States Department of Defense. The contract will support Lydall's investment in the two new meltblown production lines.

When the two new lines are in place, Lydall will increase its capacity of meltblown filtration media to support the monthly domestic production of 140 million N95 respirators or 540 million surgical masks.

"We are incredibly thankful to the U.S. government for recognizing the importance of accelerating domestic production of N95 and surgical

face masks and providing the grant we need to do just that," Greenstein said. "We also want to congratulate the state of New Hampshire and the city of Rochester on this investment and are grateful for their collaboration and partnership. Together, we are supporting domestic supply chains, creating American jobs and contributing to the fight against COVID-19."

The DOD grant will cover roughly half the cost of the $27 million expansion that will include the 47,000 square foot facility.

Greenstein said that the COVID-19 pandemic was a wake-up call for governments around the world, who had previously outsourced the majority of their PPE production to China and found they couldn't get it quickly enough when they needed it most.

"Now we realize that time matters," she said. "And this is an investment that will help us bring those supply chains back home."

Lydall makes the inner mask filtration, or media, that goes in the middle of the high-performing face masks that capture the virus and other pollutants that can make us sick.

Among those taking part in the ceremony were U.S. Sen. Jeanne Shaheen, Rochester Mayor Caroline McCarley, as well as a representative of Gov. Chris Sununu's office.

Shaheen said she was thrilled with Lydall's contract with the DOD and said the deal would not have come to fruition if not for the collaboration between federal, New Hampshire and Rochester officials.