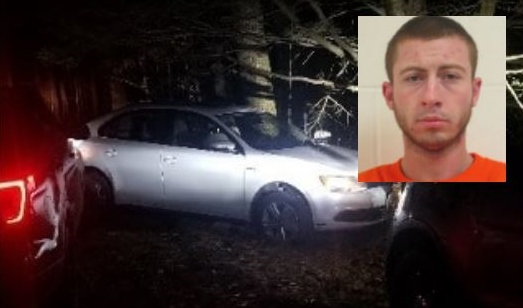 ACTON, Maine - A Maine man is waking up behind bars today after police say he led them on a chase that began in Rochester and ended in Acton where spike mats, a precision crash and a K9 unit were all used leading to his capture.

The incident unfolded around 11 p.m. on Sunday when Rochester (NH) Police attempted to stop Christopher Landry, 24, who was said to be driving a Volkswagen Jetta without the owner's permission.

Maine State Police were notified when he was last seen fleeing into Lebanon, where moments later a state trooper observed the vehicle traveling erratically. The trooper activated his emergency lights and siren to conduct a traffic stop, but the vehicle sped off at a high rate of speed.

Another trooper was in the area and joined the pursuit as it continued toward Acton, where a York County Sheriff's Deputy deployed spikes. The vehicle began to slow down but was continued to flee, sometimes driving in the opposing lane, according to a report from Maine State Police.

Safety officials said a trooper managed to end the chase with a PIT (precision immobilization technique) stop, after which Landry fled into the woods on foot.

A perimeter was then set up with Troopers from Troop A, B, and G along with members of the York County Sheriff's Office.

Trooper Adam Schmidt and K9 Ibo arrived on scene soon after to conduct a track, which located Landry deep in the woods hiding behind a tree where he was taken into custody without further incident.

Landry, who did not have a valid license, was charged with a laundry list of charges including eluding an officer, criminal mischief, reckless conduct with a dangerous weapon, unauthorized use of property, failing to stop for a law enforcement officer, violating conditions of release and operating after suspension.

Landry, who is from the Sanford/Acton area, is currently being held at York County Jail without bail. Police did not release his arraignment date.