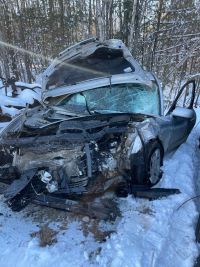 The Hyundai sustained heavy damage in the crash. (YCSO photo)

ARUNDEL, Maine - A Maine man died in a head-on crash in Arundel on Saturday.

York County Sheriff's deputies responded to the intersection of Log Cabin Road and Old Post roads around 2 p.m. and found that a 2009 Hyundai Sonata operated by Christopher Rush, 66, of Benedicta was traveling west on Old Post Road when a 2003 Lexus, driven by Joann Lapalme, 64, of Kennebunkport was turning eastbound onto Old Post Road from Log Cabin Road. The Lexus turned into the path of the Hyundai, striking it head-on.

Rush succumbed to injuries sustained in the crash.

A passenger in his car, Isiah Rush, 29, and the driver of the Lexus, Joann Lapalme, 64, of Kennebunkport, were both taken to Maine Medical Center in Portland. Their conditions were unknown as of late Saturday night.

The investigation into the crash is ongoing.

Anyone with information is asked to get in touch with YCSO.