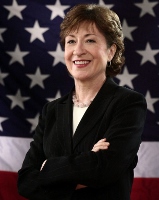 A few weeks ago, Westbrook resident Cathy Wiles called my Portland Constituent Service Center to alert me to a new Social Security Administration (SSA) policy that could have prevented seniors from accessing their online 'my Social Security' accounts. The change, which was scheduled to take effect on August 1st, would have made text messaging the only means of verifying individuals identities and guaranteeing access to their accounts online.

As the Chairman of the Senate Aging Committee, I was concerned that this decision would have placed a high burden on seniors, many of whom do not own a cell phone or may have a phone that does not receive or send data. I immediately asked my colleague Senator Claire McCaskill (D-MO), the Ranking Member of the Committee, to join me in writing a letter to the Social Security Administration. Our letter urged Acting Commissioner Carolyn Colvin to reconsider its policy and provide alternative identification verification methods that retain security but are more accessible to Social Security recipients.

As a result of our letter and of the concerns expressed by seniors across the country, the Social Security Administration removed the text messaging requirement. Instead, text message verification will be preserved as an option, and the SSA will develop additional security measures for those who lack access to a 'smart' phone.

While it is critical that the Social Security Administration and other federal agencies protect Americans personal information, the SSAs proposed requirement failed to take into account the fact that many seniors do not use a cell phone. According to a 2014 study from Pew Research Center, almost a quarter of people age 65 and older in the United States do not have a cell phone. In addition, a significant number of rural Americans lack access to reliable cell phone service. On top of both of those factors, some disabled and older Americans receiving Social Security are not comfortable using technology or cannot afford the higher costs associated with smart phones.

While its proposed text messaging verification policy did not take into account the circumstances of many Social Security recipients, it is encouraging that the Agency did respond when concerns were raised. In response to the letter I sent with Senator McCaskill, Acting Commissioner Colvin informed us that the SSA will roll back its text messaging requirement. She also assured us that the Administration is working on alternative authentication options that will be implemented within the next six months.

Senator McCaskill and I spoke up, as did seniors throughout the country, and the Social Security Administration heard us loud and clear. I look forward to working with the SSA to ensure that alternatives to text messaging authentication are accessible to all users while protecting seniors personal information.