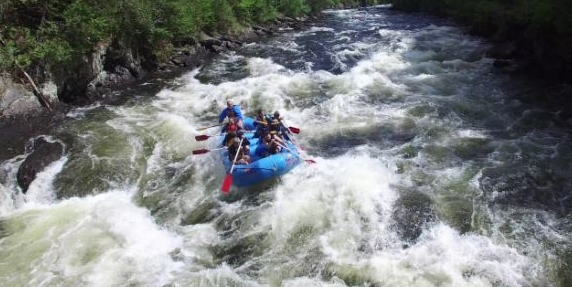 Whitewater rafting excursions are very popular along the Kennebec as shown in this youtube photo.

INDIAN STREAM TWP, Maine - A 33-year-old Fairfield woman died after being ejected from a whitewater raft on the Kennebec River on Saturday.

Emily Fournier and her family were whitewater rafting with the Magic Falls Rafting company when she and two others in the raft were ejected from the raft when they paddled through one of the larger rapids on the upper Kennebec river around 11:30 a.m.

Fournier floated through a portion of the Kennebec River after being ejected and was pulled back into the raft but was unresponsive. Once in the raft, emergency life saving measures were performed until the raft pulled over at an emergency evacuation point at the Moxie Lake Boat launch where they were met by EMS personnel, and she was loaded into an ambulance. Fournier was declared deceased by EMS personnel at approximately 1 p.m. and was taken to the Lawry Funeral Home in Fairfield.

The Maine Warden Service, Magic Falls Rafting, Somerset Sheriff's Office, Forks Fire and Rescue and Upper Kennebec Valley Ambulance Service all assisted with the incident. No further information is available at this time.