Make everything quicker: diagnoses, referrals; they have to respond sooner 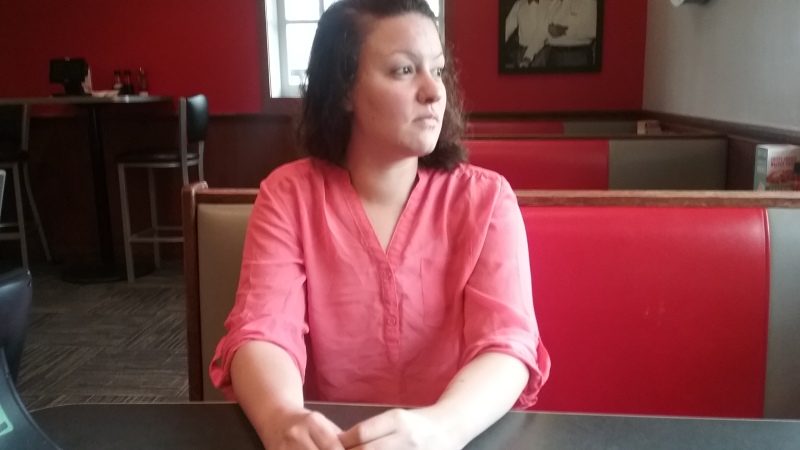 Brittany Eldridge says she felt let down by the response she got from mental health professionals when she went to them for help. (Rochester Voice photo)

ROCHESTER - Brittany Eldridge of Rochester has suffered with panic attacks for several years now, but in March she saw it was getting worse.

"I found myself rocking back and forth in my bed one morning, I couldn't get out of bed and my heart was racing," she said during an interview last week with The Rochester Voice. "I was dizzy and felt faint."

But when she called one of the state's nonprofits that deal with mental health issues she was told it would be several months before they could get her in to talk to a psychiatrist.

Eldridge, who also suffers from depression, anxiety and obsessive-compulsive disorder, said the panic attacks, which had put her in local emergency rooms twice in the past six months, only got worse.

Eldridge, 28, who graduated from Spaulding High, knew what she had to do. She checked herself in to the Behavioral Health Unit at Portsmouth Regional Hospital for inpatient treatment.

"What I wanted was to get some psychoanalysis, some counseling to help me get to the root of my feelings," she said.

But that's not what she got.

"First I had to wait overnight in the emergency room," she said. "Then they wheelchaired me to the mental health unit. I was in an open room with another roommate. Nurses would walk up and down the halls and record what we were doing.

"I felt like I was in a science lab, part of an experiment."

She said there was no time to talk to a mental health professional except for brief encounters throughout the day that she didn't think were productive.

While there for almost a week, she said the days were structured, with various activities like making collages, having group discussions and other programs that seemed to have little connection to her condition. Mealtimes and snacks were punctual and precise.

"But there was no connection of care," she said. "No time to talk, to interact, or for psychoanalysis. They seem to try to put you in different directions. It felt like a warehouse."

After six days there, she said she wanted to go but they wouldn't release her until she had arranged an appointment with the original mental health nonprofit she had called earlier. This time they agreed to see her quickly.

Eldridge, who has been out of the hospital for about a month now, said she was still feeling a bit depressed, but began a turnaround several weeks ago when she signed up to be a fund-raiser for the National Alliance of Mental Health New Hampshire Walk this October.

Now Team Brittany is a reality, and it's been more therapeutic that her time in the hospital.

"I was moping around the house and feeling bad about myself," she said, "so I wanted to do something where I have an impact and purpose. That's what I have with the NAMI walk. Plus I figured by doing this walk I can be around people who are suffering like me and maybe learn something."

Eldridge said, while she is on several prescribed drugs as part of her treatment, illegal drugs, substance abuse or alcohol have never been a part of her struggles.

After her lifelong struggles with mental health that came to a boiling point these past months, Eldridge says she has some advice for mental health providers.

"Make everything move quicker," she said. "Diagnosis, referrals, support, they have to respond in a timely manner."

Former Chief Justice John Broderick, who leads the state's effort to improve mental health services and is the senior director of public affairs at Dartmouth-Hitchcock Hospital, said the lack of infrastructure within the mental health treatment system makes Eldridge's lament far too common.

"We do not have in the United States an infrastructure for mental health challenges like we do physical challenges," he said this week in a telephone interview with The Rochester Voice. "If you break a leg and call 911 you'll be in a hospital in 20 minutes."

Meanwhile, for many with mental health issues they're warehoused in local hospital emergency rooms till beds open up at New Hampshire Hospital in Concord, the state's main facility for mental health treatment, Broderick noted.

Broderick said Eldridge's call for quicker and more substantive psychoanalysis to get at the root of various psychoses is reflective of a larger systemic problem that hinges on the pay psychiatrists and other mental health professionals get for services.

"There is a declining number of psychiatrists," he said. "They are the lowest paid among doctors."

Broderick noted that while insurance companies, including Medicaid, cover mental health, the reimbursement rate for mental health providers is often lower than for doctors who cover physical ailments.

And while the federal Mental Health Parity and Addiction Equity Act of 2008 sought to achieve equal reimbursement rates for physical/surgical and mental health services that just hasn't happened yet, Broderick said.

But he says there is light at the end of the tunnel.

"With New Hampshire's new 10-year mental health plan, it is beginning to change, we're trying to address some of these challenges," he added.

He said the biggest obstacle is getting health providers and health insurers to treat mental health services as seriously as they do physical health issues.

"If you've got diabetes or heart disease, they know exactly where to send us and what to do," he said. "If someone has mental health problem, no one knows."

Broderick, the state's pointman on mental health, has been touched by the scourge of mental illness, himself.

In March 2002 his son who was suffering from serious mental health issues, bashed his father's head with a guitar multiple times while he was sleeping, a savage beating Broderick doesn't remember but put him in intensive care with a broken jaw and other serious injuries for weeks.

His son, Christian, 30 at the time, spent three years in state prison before being paroled. John Broderick spent months recovering from his injuries.

If you want to join Brittany's team as she fund-raises for the October NAMI walk, click here.