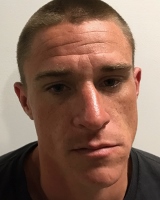 ROCHESTER - An Ossipee man who drew welfare checks by police to the Rochester Public Library twice on Tuesday was arrested on his second visit after he allegedly threatened officers and became combative when being placed under arrest.

The first call came in around 4 p.m. with the reporting party at the library saying a man with two bags was walking around before going into a bathroom where he began talking to himself.

When police arrived they found the subject had left and saw no sign of him nearby.

Then around 5:30 p.m. a reporting party from the library called police again to say the same man was walking around and was "acting extremely high."

When police arrived they found Nathan Laracuenti, 29, of 2 Colebourne Drive and advised dispatch that he was being uncooperative.

"The male refused to cooperate with the officers, threatened them and started to become physical toward them," Rochester Police Capt. Todd Pinkham said today. "Officers then went to take him into custody, however he continued to physically resist."

Pinkham added that Laracuenti was then handcuffed and taken into custody after a brief struggle.

He was charged with two counts of resisting arrest and one count of criminal mischief.

No one was injured during the incident, Pinkham said.