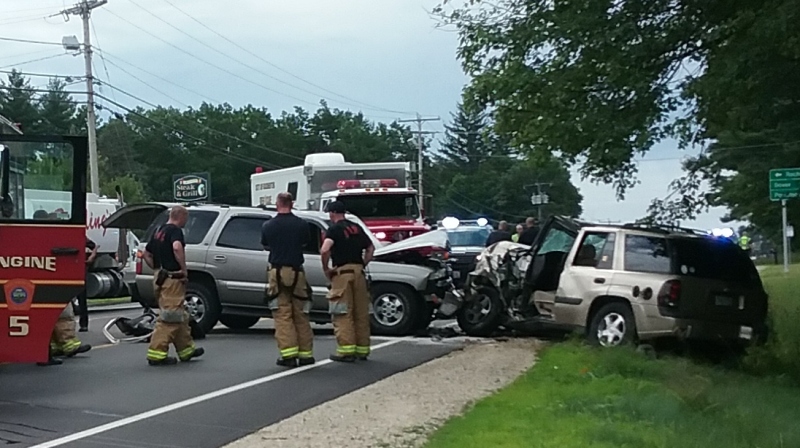 ROCHESTER - A Farmington man was summonsed in connection with two separate motor vehicle accidents today, including a serious head-on collision around 9 a.m. on Farmington Road in front of Volkswagen of Rochester and a minor accident just moments before.

The clerk at the Mobil Station across the street from the crash said she heard the crash and knew it was bad.

"it sounded like they were crashing into my store," she said.

Route 11 was shut down completely for about 45 minutes as first responders worked the scene while traffic backed up to The Ridge going north and Home Depot headed toward town.

Around 10;15 a.m. one lane was opened to all some traffic through on an alternating basis. Both vehicles were heavily damaged and had to towed from the scene, which was also being worked by an accident reconstruction team.

Ballou, who was transported to Frisbie Hospital for precautionary reasons, was issued a summons for NH RSA 265:22 - Highway Markings.

Ballou was earlier involved in another accident just prior to the Farmington Road crash that resulted in a separate vehicle striking a Washington Street residence.

Police say the earlier accident occurred in the area of Washington and Sylvain streets when Ballou's Tahoe turned right from Sylvain on to Washington and struck an oncoming 2015 Chrysler 200, driven by Luann Friel, 57, of Woodsville, which was traveling east on Washington. The impact caused the Chrysler to lose control and careen into a residence at 27 Washington St. No residents were home at the time of the accident, and neither driver was injured.

As a result of that accident, Ballou was issued a summons for Failure to Yield (NH RSA 265:30).

Both accidents are still under investigation at this time.