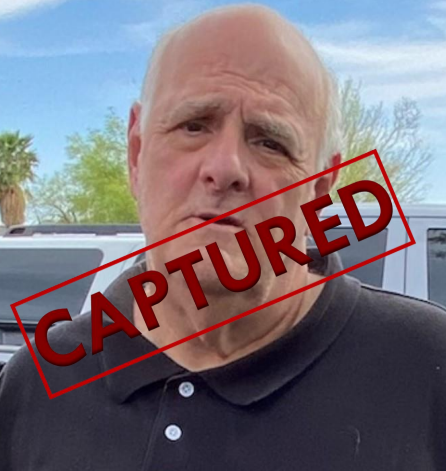 CONCORD - A New Hampshire man was arrested on Monday for allegedly robbing an Arizona bank robbery less than two weeks after his release from a Granite State prison where he served 96 months on similar charges here.

Matthew Gangi, 66, of Pittsfield, was just released from the U.S. Bureau of Prisons on March 23, was scheduled to serve a three-year period of supervised release in New Hampshire, but was almost immediately found to be in violation of his supervised release after he was alleged to have stolen a vehicle in Lawrence, Mass., on March 31st.

Not long after U.S. marshals were able to determine that Gangi fled New England in the stolen vehicle and was headed south. This information was shared with the marshals' offices from Texas to California.

On Monday it was reported that Mr Gangi robbed the Arizona Bank & Trust in Phoenix, Az. As a result of this robbery, the US Marshals in Arizona intensified their search and located the stolen vehicle that Gangi was last known to be driving in a motel parking lot in Tucson, Az. After a short period of surveillance Gangi was seen leaving the motel and was arrested without incident.

Gangi is being held at the Central Arizona Detention Center pending his initial court appearance at a U.S. District Court in Tucson in reference to his New Hampshire supervised release violation. This hearing will be a warrant of removal hearing to decide if he will be returned to New Hampshire. An additional federal bank robbery charge against Gangi is currently pending at the U.S. District Court in Phoenix, where he will also be arraigned in the near future.