Man whose car crashed into pharmacy had medical event after accident: witnesses 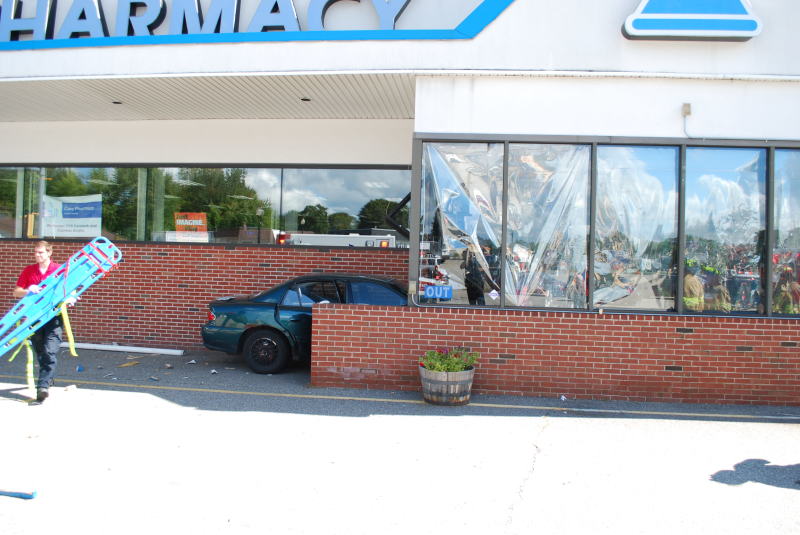 The Buick crashed directly through the doors of the pharmacy coming to rest partially inside the vestibule. (Rochester Police photo)

ROCHESTER - A car went careening into the doorway of Care Pharmacy Friday afternoon, injuring an elderly Rochester woman and temporarily closing the store.

Police say the driver of the vehicle, Ryan Vansylvong, 22, of Dover, was driving a 2001 Buick Century when he first struck the east wall of the drugstore, causing damage to a concrete bench positioned along the wall. He then struck a U.S. Postal Box and then the glass doorway leading to the outer vestibule.

Constance Mann, 82 of Rochester, was exiting the store when the crash occurred and was struck while inside the vestibule. She sustained what were described as nonlife-threatening injuries and was taken to Frisbie Memorial Hospital.

Vansylvong, who was found to be semi-alert by first responders, had a medical event after the collision and before police arrived, according to witnesses.

He was also transported to Frisbie for evaluation.

A member of the city's Building, Zoning and Licensing Services department inspected the damage and found the building to be structurally sound.

The pharmacy was closed during the investigation, and business was limited once the vehicle was removed due to the substantial damage done to the doorway.

Police did not indicate from what street or direction Vansylvong had driven prior to the crash.