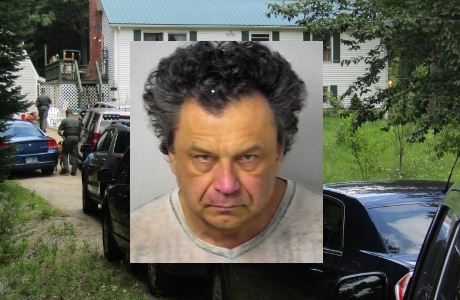 In background, Police scour the grounds of a double murder at the Farmington home then belonging to Dean V. Smoronk. (Rochester Voice file photo); Smoronk after his arrest in Virginia on drug charges in June of 2017. (Virginia State Police photo)

CONCORD - The Farmington man whose home was the site of a grisly double homicide in 2017 will plead guilty to trafficking in methamphetamines on Tuesday in U.S. District Court in Concord, according to online court records.

Dean Smoronk, 57, formerly of 979 Meaderboro Road, who was named in a January indictment, is accused of trafficking in five grams or more of methamphetamine, or "ice" in July 2018.

Smoronk was taken into custody in December on a charge of being a felon in possession of a firearm as part of a Strafford County drug sweep. He was accused of trying to sell a Sig Sauer P-320 9 mm originally stolen out of Milton.

Prosecutors in the case, however, never sought an indictment on the gun charge, instead indicting Smoronk in the meth case.

Smoronk's trial was originally to have been held in June, but had been postponed several times.

Smoronk discovered the two women missing upon his return from Florida on Jan. 28, 2017, and called police several hours later after first poring over surveillance videos. Police found the bodies the next day amid debris under an upstairs porch. He has never been implicated in the killings, however he does have a record of drug involvement, including the arrest in South Carolina with his now-deceased girlfriend in 2014; and in June 2017 when he was arrested on Interstate 95 in Virginia for drug possession.

He returned to New Hampshire a year ago after his release from a Virginia jail.

A week later at a probable cause hearing in U.S. district court it was determined he should be held without bail. He continues to be held at undisclosed location, prosecutors have said.

In April 2017 the state of New Hampshire declared Smoronk a known drug dealer as part of its effort to seize more than $14,000 in cash from Smoronk's Farmington home. That petition was tossed out of court because the state was somehow unable to get the forfeiture petition to Strafford County Superior Court on time.

Meanwhile, Timothy Verrill, 36, of Dover, the man accused in the deaths of Sullivan and Pellegrini and said to be a longtime friend of Smoronk's, is expected to have his murder trial in October at Strafford County Superior Court.