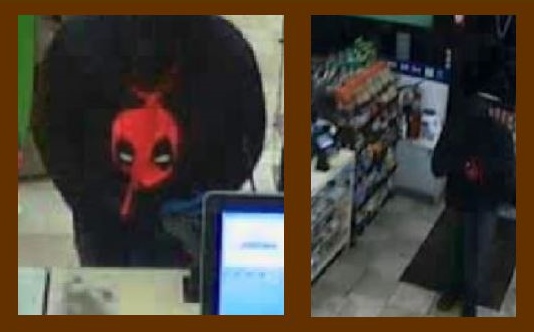 Surveillance images from robbery at Cumberland Farms in Somersworth on Monday.

SOMERSWORTH - Somersworth Police are on the lookout today for a man who robbed the High Street Cumberland Farms on Monday evening.

The incident unfolded around 5:45 p.m. as Somersworth Police responded to the 258 High St. convenience store where it was learned a masked male suspect came into the store and demanded money.

The suspect did not show a weapon, police say, but made motions which led the clerk to believe he had a weapon. The suspect left the business with an undisclosed amount of cash and fled the area on foot.

There were no reported injuries.

While surveillance images are somewhat fuzzy and show no face, police are still hoping someone in the public will be able to help identify the suspect, who is described as about 5'05" to 5'07" tall wearing blue jeans, black shoes and a "Deadpool" movie hoodie.