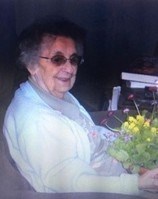 EAST ROCHESTER - Margaret "Peggy" Davis, 96, heaven has a new angel, as she died peacefully on April 8, 2021, just shy of her 97th birthday.
Margaret was born in North Berwick, Maine on April 24th,1924 to Hancy and Edith (Ramsdell) Moulton. She attended North Berwick Schools and graduated from North Berwick High School. She married Nathaniel Davis of Ogunquit, Maine in August of 1944. Together, they enjoyed raising their daughter, Nancy, spending weekends in Ogunquit, Maine, and later in retirement traveling to state and national parks in their RV camper often bringing their granddaughter, Susan, on their adventures.
In later years, "Marching Margaret" could be seen out and about in East Rochester, where she lived for almost 60 years, briskly walking and chatting with her faithful friends. While she never played, she was an avid fan of both golf and bowling which she enjoyed watching on television when she wasn't enjoying the Sunday morning polka show on the console stereo. Although a frugal person herself, shaped by the Great Depression and WWII, Margaret was generous with both her time and talent. She enjoyed knitting warm mittens and hats for the local Head Start and Community Action Programs. She also crocheted dishcloths and towels to donate to senior citizens in the community.
Her endearing nature will be sorely missed by her surviving family; her daughter Nancy Morneault and husband Frank, a granddaughter, Susan Parshley and her husband Michael Carpenter, and her great granddaughter, Stella. Margaret was predeceased by her parents, husband Nathaniel who passed in 1992, sisters Leona Guptil, Viola Allen, and Eva Moulton and her brothers Raymond, Richmond and Carroll "Peanut" Moulton.